Chippa plans for the future 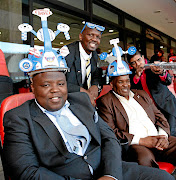 Chippa United boss Siviwe Mpengesi will sleep peacefully for the next few months knowing that his team managed to stave off the relegation.

When the Chilli Boys took on Kaizer Chiefs in a crucial league match on Saturday, Mpengesi sat in an isolated area on the top rung of the stadium, far from the luxury of the presidential suite where he would normally take up his position on match days at Nelson Mandela Bay Stadium.

Alongside him, and also on the edge of his seat, was team manager Wanda Mbenguzana. The two watched anxiously as the drama unfolded.

Much to the delight of the duo, Chippa won the game 1-0 to retain their Absa Premiership status as the team finished 12th on the log, three points clear of relegation zone.

"It's a relief that we survived," Mpengesi said. "Like everyone else we believed that we did not deserve to be in this position, but the situation made us to be here.

"We are happy about what has happened but also, we think it is an opportunity for us to plan for next season.

"Next season we do not have to fight for relegation, we have to keep the team stable."

Asked about the team's plans for next season, the notoriously trigger-happy chairperson was quick to say: "Definitely to keep the coach.

We also want to beef up the management as you all know that we are thin in the back office ... especially after the exit of Morgan (Mammila), (Peter) Koutroulis and others.

"We also need to go back to the issue of getting a technical sponsor. This season we were very poor on such matters."