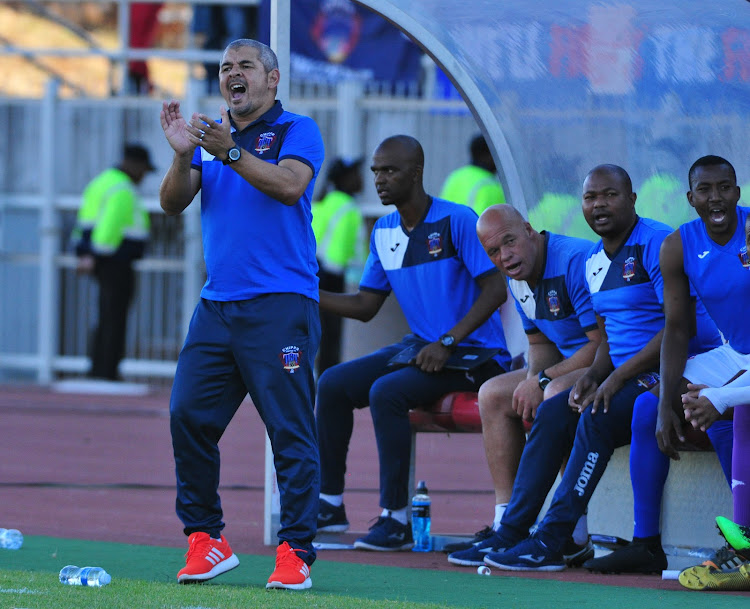 Chippa United head coach Clinton Larsen encourages his players during a 3-1 Absa Premiership away win over Polokwane City in Polokwane on May 4 2019.
Image: Philip Maeta

“I never want to go through it ever again‚” is how relieved Chippa United coach Clinton Larsen described surviving the first relegation battle of his coaching career.

Rhulani Manzini’s goal was enough to keep the Chilli Boys in the Absa Premiership for another season as they beat Kaizer Chiefs 1-0 in a dramatic final day fixture of the season at Nelson Mandela Bay Stadium in Port Elizabeth on Saturday.

The win saw Chippa finish 12th on the log and three points off the relegation zone.

The victory also means that the Eastern Cape will once again have a team to carry its flag in the top-flight next season.

“I have been very fortunate‚ it’s my 10th season coaching in the PSL and of those 10 seasons I have finished in the top eight‚ eight times‚” said Larsen.

“The other two seasons I started halfway at Golden Arrows and Maritzburg United.

“So‚ I have a 100% record in terms of when I started with the team I’ve always finished inside the top eight. I pride myself on that and I hope that this never happens again.”

It all came down to the last day of the season to decide Chippa’s fate in the league with them having fought a tense relegation battle.

Playing Chiefs‚ who were also looking to finish in the top eight bracket‚ did not make things easy for Larsen’s troops.

However‚ the coach said his team’s performance in their previous match against Polokwane City gave him the confidence needed to believe in his troops‚" he said.

“It was nerve-racking in the end. But when you look at the log even if we had lost we would have stayed up.

“We knew we had to do the job and not rely on other teams. I was very confident after what I saw against Polokwane City."

Larsen said he knew his troops would be up for the fight against Chiefs. He said he could see it in their eyes and their body language.

“Again today the players wore their hearts on their sleeves‚ they put their bodies on the line today and that is what we asked from them‚" he said.

He said he told his team that their defending need not be pretty‚ but that had to be effective.

“We knew we were going to frustrate them in the middle of the park we had two strong bands of four and they found it very difficult to penetrate‚" he said.

“I thought (William) Twala has come into his own in the last three games and Kurt Lentjies as well his intelligence and his understanding of tactics in key moments of the game is second to none.”

Larsen was forced to make a substitution as early as seven minutes into the game after Tebogo Makobela broke his leg in a collision with Chiefs defender Willard Katsande.

“What happened to Makobela is sad‚ especially for a player who has just made that right back berth his own in the last three games.”

The coach said his plan was to score first as he knew that would frustrate the Glamour Boys.

“I said it two weeks ago. I would like to see them put their feet where it hurts. They had one eye on the cup next week‚ so we had to make it a physical encounter and it was.

“I said to the players if it means getting rough then we have got to. We are fighting for our lives and we need to show it in our body language and I am happy that the players did just that.”