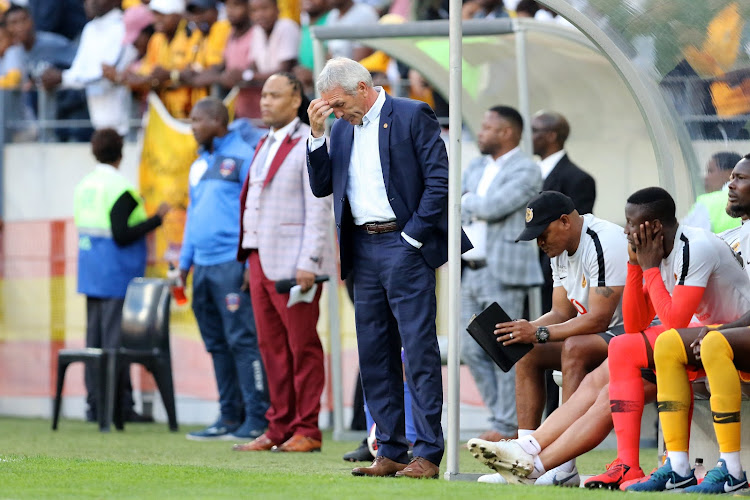 Kaizer Chiefs head coach Ernst Middendorp cuts a dejected figure on the bench after his club was beaten 1-0 by Chippa United in the final round of the Absa Premiership that disqualifies them out of th MTN8 later this year.
Image: Richard Huggard

It was a drama-filled final day match and while Chippa were left celebrating renewed life, Chiefs were edged out of the top half of the league into ninth position which means they will not play in the lucrative MTN8 next season.

It is first time the 2006-2007 season, ironically when German coach Ernst Middendorp was in charge, that Chiefs will not feature in that cup competition.

For Chippa, who finished 12th, it was another great escape after narrowly missing out on the relegation playoffs last season on goal difference.

Chiefs tried all they could on the day but the home team played with their hearts on their sleeves absorbing whatever attack Chiefs threw at them.

It was also sweet revenge for the Chilli Boys after they were knocked out of the Nedbank Cup semi-finals by Chiefs last month.

The first half started off on a physical note which saw referee Victor Gomes award three yellow cards in only 20 minutes of play.

Chippa suffered a massive blow in the sixth minute when defender Tebogo Mkobela was carried off on a stretcher with a broken leg after clashing Teenage Hadebe. He was replaced by Frederic Nsabiyumva.

The first good chance of the game came after 12 minutes when Khama Billiat's diagonal shot hit the inside of the upright and bounced back into the field of play with Chippa goalkeeper Mbongeni Mzimela well beaten.

Chiefs continued their early domination and Billiat had another shot blocked in a crowded Chippa goalmouth 13 minutes later.

Manzini tapped in his sixth goal of the season just after the half-hour with a pin-point, low cross from Phetso Maphanga.

Minutes later Chiefs keeper Daniel Akpeyi had to pull off a fine save diving low at full-stretch to his left to save a stinging shot from  Tercious Malepe.

Chiefs coach Middendorp made two changes at the start of the second  half in an attempt to intensify his attack on Chippa.

They started the second half well with those changes in pursuit of an equaliser but for all their endeavors the first real chance came from Billiat again whose shot from the left was saved by Mzimela.

A minute later, Billiat was at it again and brought out best of Mzimela who pulled off an acrobatic save to deny the Zimbabwean again.

Chiefs continued to push for a goal but the heroics of Mzimela and his defence held them at bay.