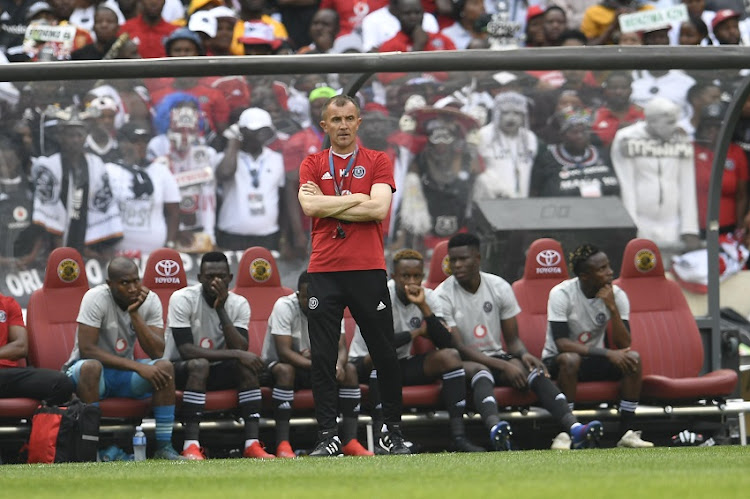 Win or lose the 2018-19 Absa Premiership‚ Milutin Sredojevic has restored Orlando Pirates to where they should be in South African football‚ even lacking the trophy in two seasons that the coach and his club have coveted.

Not all Buccaneers fans will see it that way should they be met with the bitter disappointment by around 5pm on Saturday of knowing that Mamelodi Sundowns are champions.

Second-placed Pirates have 54 points‚ and need a win against tricky‚ fifth-placed Polokwane City at Orlando Stadium‚ and for leaders Sundowns (56 points) to lose or draw against Free State Stars‚ to lift a first league trophy since the second of Bucs’ back-to-back trebles in 2011-12.

Disappointment might well leave their supporters‚ and even a notoriously unpredictable management‚ displeased.

Sredojevic‚ the line has been from many on social media in recent months‚ has been given everything – a squad of tremendous talent‚ bolstered by more impressive signings‚ and an army of boffins on his bench.

Yet the coach who left Pirates still wet behind the ears at 37‚ then strengthened his career across Africa before returning a decade later at 47‚ has failed to win a trophy now at 49.

It would not be an unfair sentiment.

Also fair is to reflect on where Pirates were before Sredojevic arrived – having finished an appalling 11th in 2016-17‚ trophyless and humiliatingly having conceded six goals twice that campaign.

The public often complain when a coach talks endlessly of building‚ month after month‚ season after season.

Sredojevic never wasted time in that manner at Bucs‚ despite not having time on his side being appointed just two weeks before the 2017-18 season started. After some understandable early jitters‚ Pirates finished runners-up‚ even if in the end Sundowns won by five points.

That finish guaranteed a return to the Caf Champions League after a six-year absence. Pirates reached the group stage‚ and if they could not progress further‚ the current generation earned valuable experience for 2019-20’s edition.

Pirates should have earned the elusive trophy in the Telkom Knockout in December‚ but were stunned in an epic final by Baroka FC on penalties.

In the PSL‚ as was displayed in the Champions League‚ Bucs have appeared just a shade off the winning machine built over six years by Pitso Mosimane at Sundowns.

It has shown at the tail end‚ where Sundowns have gone on a four-game winning run. Pirates also won four in a row‚ then‚ when it mattered most‚ last weekend against Cape Town City at Athlone Stadium they drew 2-2.

“We wanted [the win against City]‚ for the badge‚ for the jersey‚ for the supporters. However it was not meant to be‚” Sredojevic said.

“Now our focus is on our last match against Polokwane. We have a match where we shall continue where we stopped in this match – all-out in attack.

“The intention is to win that last match and then to see where we are.”

Really only Pirates’ game management – and maybe a player or two – have been marginally behind Sundowns’.

That both have conceded 24 goals – a lot for teams chasing a league title – is a reflection that both had to juggle continental and domestic ambitions‚ but also testimony that neither put an emphasis on playing their football safety-first.

It seems all doom and gloom for Pirates. Sundowns’ machine hardly seem likely to splutter against Stars.

But the Free Staters are desperate for a win to survive relegation. In football‚ as Liverpool and Tottenham Hostpur showed just this week‚ anything is possible.

If Downs win‚ it might be hard for Pirates’ supporters and management to stomach. That would be understandable.

Whatever happens‚ Sredojevic deserves credit for bringing the Buccaneers back so quickly as a force.