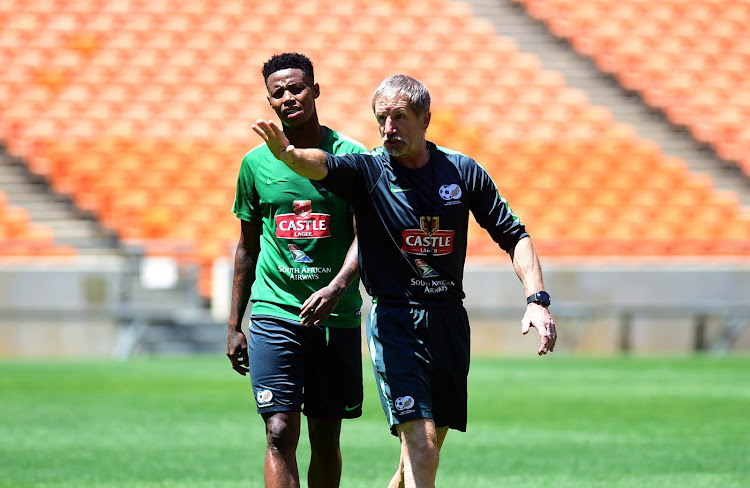 Stuart Baxter has said that Keagan Dolly and Bongani Zungu are fit‚ and have played some matches in France‚ but a decision needs to be taken on whether Bafana Bafana can get them “razor-sharp” for the Africa Cup of Nations (Afcon) in June and July.

Baxter said that Zungu is close to full fitness havnig played first-team League 1 games‚ while Dolly is more of a concern having only turned out in reserve matches.

The duo were called up for “assessment” for Bafana’s 2-1 Afcon qualifying win against Libya in Tunisia last month that saw South Africa through to Egypt 2019.

Both had returned too late from long-term injuries that have kept Montpellier winger Dolly and Amiens midfielder Zungu out for most of the 2018-19 Ligue 1 season to be automatic choices for Bafana against Libya.

Dolly pulled up with a hamstring in training in Sfax‚ while Zungu was an unused substitute against Libya.

Dolly’s season has been a write-off in France. He played three games in August and September‚ then broke his leg.

Since a return in March he has been fielded in three of Montpellier’s reserve matches‚ the last on April 19.

Zungu is in a far better state of fitness having played three first team games for Amiens in April‚ one of them starting.

“I think Bongani played an hour‚ then he was on the bench and didn’t get on‚ and he’s then played again for 30 or 40 minutes‚” Baxter said.

“I think they’re both fit. You don’t pick an unfit player and put him on the bench in the French top league.

“Whether they are razor-sharp – I think we’ve got to assess that and say‚ ‘Can we bring them up in our camp? Will these games that we’ve got bring them up to full speed?’

“Keagan is probably more of a concern because his injury was such a severe one. Bongani is fit.

“And I’ve got very good contact with Amiens and their football consultant‚ John Williams. He assures me that Bongani is doing very well.

“Keagan’s different because they played him‚ he came to us‚ and then he went back with a new injury.

“Then he recouped‚ he got back in the team‚ and he has played [reserve games] since then.

“He has really got to play a bit more before we can say he’s over his injury and we can bring him up to speed.”

Baxter seems sure to have both Dolly and Zungu in a squad of the core of his players in Johannesburg in June‚ to assess the duo further and try to have them play in a friendly‚ likely to be against Zambia.

Bafana then depart for a further camp in Dubai‚ where they meet Ghana in a confirmed friendly and acclimatise to heat in preparation for Egypt’s mid-summer.

SA have a further friendly in Egypt – Algeria and Tunisia are being lined up – ahead of their Afcon kickoff against Ivory Coast in Cairo on June 24.

Bafana are also drawn with Morocco and Namibia in Group D.