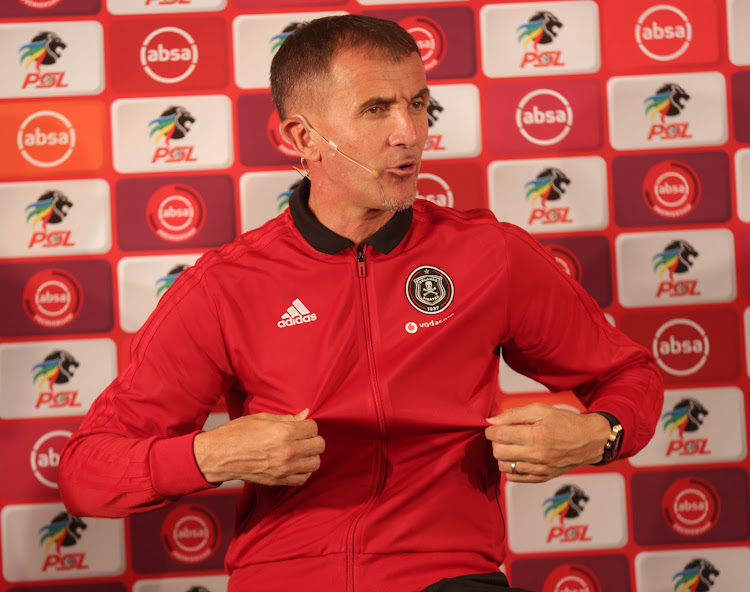 Milutin Sredojevic , coach of Orlando Pirates won Coach of the Month during the Absa Premiership 2018/19 Monthly Awards at PSL Offices, Johannesburg on 02 May 2019.
Image: ©Samuel Shivambu/BackpagePix

Orlando Pirates coach Milutin Sredojevic still believes in doing the job first and talking later‚ still not saying saying “I want to win the league” even as top-of the-table Bucs face a vital 180-plus minutes to end a league drought that stretches back to 2012.

Pirates are locked on 53 points with defending champions Mamelodi Sundowns but have a critical four-goal (+17 to +13) advantage on goal difference over the Brazilians‚ with two games to finish off a season described by the Bucs coach as “a rollercoaster”.

Sredojevic’s side will win the league‚ barring two wins and a goal avalanche from Downs‚ if they get maximum points against Cape Town City at Athlone Stadium in Cape Town on Saturday and against Polokwane City at home in Orlando Stadium on May 11.

“I have learned from the best that you celebrate only when you reach the last line‚” explained the Bucs coach on why he’s not openly declaring the club’s league ambitions.

“Before that [winning the league] you have no right [to speak]. We have no right to tell ourselves that we can win. If we can win with the mouth‚ I can talk‚ promise and I can do so many things.

'I have made enemies‚' says Mamelodi Sundowns coach Pitso Mosimane

“But simply those are the beliefs that we [Bucs] believe in. Do the job – and talk after.

“I have seen in the last 19 years [as a coach] many people talking and promising and then they need to go back to answer unfulfilled promises.

“The only thing that I can promise is that we shall throw everything [in the last two games]‚ they way we have done up until now.”

Sredojevic said he respects the work that has been done by Benni McCarthy at fourth-placed City and Josef Vukusic at Polokwane [fifth on the log]‚ hence he cannot underestimate the kind of the challenge his team will face in their last two matches.

While Bucs will be playing against City on Saturday‚ their rivals‚ Sundowns‚ will only turn their focus on the league title on Tuesday when they host Golden Arrows at Loftus Stadium.

Courtesy of their Caf Champions League semifinal engagements – where they meet Wydad Casablanca in Saturday’s second leg at Lucas Moripe Stadium – Downs will play Arrows with the advantage of knowing how Bucs had fared in their game against City.