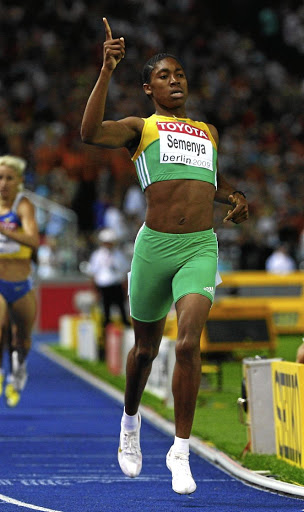 Caster Semenya is standing firm amid attempts to play down her successes.
Image: Stu Forster/Getty Images

The effect South Africa's first democratic elections in 1994 had on athletics was akin to releasing a caged eagle into the sky.

SA had made a timid comeback to international competition at the 1992 Olympics in Barcelona, but the 1996 Games in the United States was where the return was made official.

Those memorable games gave us the household names of Josia Thugwane, Penny Heyns and Hezekiel Sepeng.

Little-known (at the time) Thugwane shocked the world by winning the gold medal in the men's marathon.

The image of the petit Bethal-born, Mpumalanga, runner making his way in the final stretch of the race will forever be etched in the memory of the nation.

Wearing a pair of dark sunglasses, Thugwane cruised to the finish line cocksure of victory and started celebrating long before he hit the tape, pointing at the skies with the seven-up, soaking in the moment.

"During that moment I just thought of my country and felt like I was on top of the world," the now 48-year-old Thugwane said.

"People still ask me about that race. I understand that it was not about me, it was about the country."

Today, the one-time national hero lives a secluded life back home where he mentors young runners.

Heyns, on the other hand, made a big splash in the pools by becoming the first South African to win gold (100m and 200m breaststroke) since re-admission. Heyns, at the time, was likened to an athlete who had legendary status in the townships back in the 1980s - Zola Budd.

In the subsequent years, swimming began to upstage track and field in popularity. The dawn of the 21st century gave us aquatics stars including Terence Parkin, Ryk Neethling and Roland Schoeman.

Sporadically, though, track stars would pop-up out of nowhere such as Mbulaeni Mulaudzi did at the 2004 Olympics when he won silver in the 800m and took the baton from Sepeng. 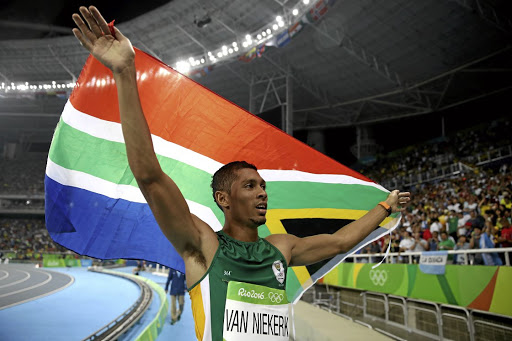 Wayde van Niekerk has been one of the country's accomplished and established athletes. / Cameron Spencer/Getty Images

The incredible and tragic story of Oscar Pistorius is arguably the biggest story of them all, and will be told for generations to come.

At the height of his career, Pistorius was the biggest athlete in the world.

His popularity was on par with the likes of Usain Bolt, if not greater, and he was affectionately dubbed the Blade Runner.

He even became the first amputee to compete with able-bodied athletes at the 2012 London Olympics.

But all of that changed on that fateful night on Valentine's Day when he murdered his girlfriend, Reeva Steenkamp, at his apartment in 2013.

"When I heard the news I was shocked, I could not believe it," said his former running partner, Ofentse Mogawane. Oscar had a lot going for him until that day happened. What happened was very sad."

Another SA athlete who changed the face of athletics is Mokgadi Caster Semenya. Semenya burst onto the scene at the World Championships winning gold in the 800m with a time of 1:55.45.

The world took notice of the runner from GaMasehlong in Moletji, Limpopo. However, the spotlight took an ugly turn as the focus shifted - not to her prowess as a runner, but more about her physical attributes.

An international storm brew over her eligibility to run as a female. She was subjected to inhumane tests and invasion of privacy by athletics authorities.

The battle for Semenya is not over. She lost her bid at the Court of Arbitration for Sport where she was challenging the International Association of Athletics Federations [IAAF] decision to introduce a cap for testosterone levels in female athletes in certain distances but she has indicated that she will appeal the ruling.

The 28-year-old has nonchalantly gone about her business, becoming a double Olympic champion, winning gold at the 2012 and 2016 Games.

The future of athletics seems to be in good hands with the world-beating Olympic champion Wayde van Niekerk playing a leading role.

Akani Simbine, Henricho Bruintjies and Luvo Manyango, are showing that they can compete with the best in the world.