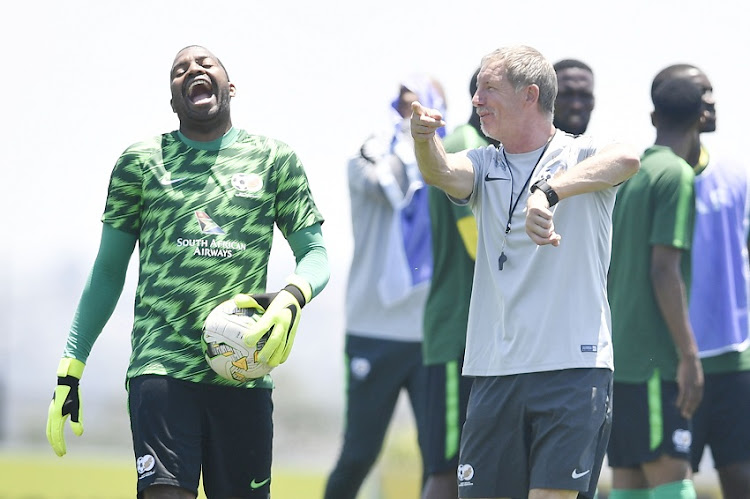 Bafana Bafana coach Stuart Baxter has admitted that Kaizer Chiefs goalkeeper Itumeleng Khune has no chance of being part of Bafana Bafana’s squad for the Africa Cup of Nations (Afcon).

Baxter had indicated shortly after Bafana were drawn with Ivory Coast‚ Morocco and Namibia for the June 21-July 19 tournament in Egypt that he would select Khune‚ even if the goalkeeper only managed a handful of games for Chiefs before the end of the Absa Premiership season.

Khune has been out injured since December having undergone shoulder surgery.

Chiefs coach Ernst Middendorp indicated last week that Khune was taking too long to resume full training‚ and had no chance of being ready for the Nations Cup.

Baxter said on Thursday he had spoken to Middendorp‚ and established that Khune certainly will not be at the Afcon.

“I was at Naturena this week‚ and spoke to Ernst and the staff there‚” Baxter said.

“They said that the training [for Khune] is going very‚ very slowly‚ it’s not in the realms of possibility that he’s going to be anywhere near fit. So that’s discounted.”

Khune last played in Chiefs’ 2-1 league win against Arrows in Durban on December 1.

He injured his shoulder in training and underwent surgery.

Chiefs have two matches remaining in the PSL – against Free State Stars at Mbombela Stadium on Saturday‚ then Chippa United in Port Elizabeth on May 11 – and complete their season with the Nedbank Cup final against TS Galaxy in Durban on May 19.