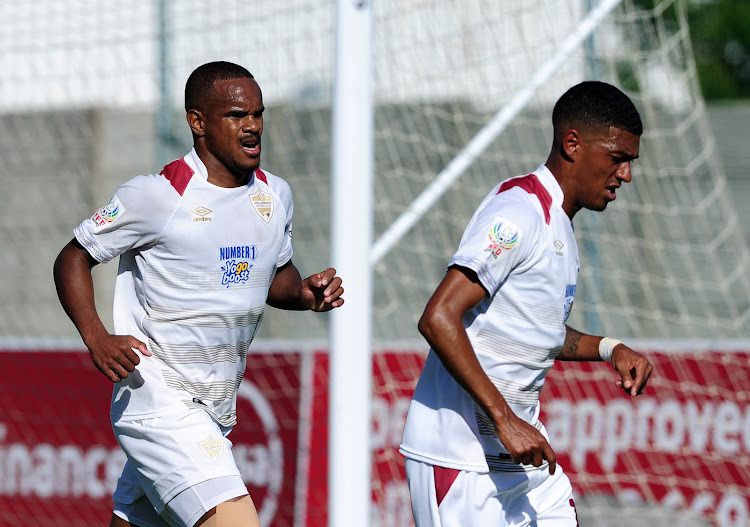 National First Division leading goal scorer Iqraam Rayners has been a vital cog in Stellenbosch FC leading the NFD table for much of the season.
Image: Ryan Wilkisky/BackpagePix

Sunday will see the culmination of the National First Division (NFD) regular season‚ with much to be decided at both ends of the table.

The only thing we know going into the last round is that Witbank Spurs will be relegated as the bottom side‚ ending 15 years in the South African second-tier‚ during which time they came close to promotion on a few occasions.

But as for who will join them in the ABC Motsepe League next season‚ and who will grab automatic promotion‚ those two questions still need to be answered.

Stellenbosch FC have led the division almost from the start this season‚ but a wobble in the final third of the campaign has seen their once commanding lead cut to two points.

They will host mid-table Maccabi FC‚ where victory will ensure they take top spot and claim a first ever promotion to the Absa Premiership‚ another feather in the cap for coach Steve Barker.

A draw will leave them vulnerable to being overtaken by second-placed Royal Eagles on goal-difference.

Eagles need a win‚ and a handsome one at that‚ as they travel to second-bottom Ubuntu Cape Town.

Stellenbosch currently have a +24 goal-difference and Eagles +21‚ meaning a draw for the former and a victory by three clear goals for the latter would leave them level.

It would then come down to goals scored‚ of which Stellenbosch have 45 and Eagles 42.

So a 0-0 draw for the Cape Winelands side and a 3-0 victory for Eagles would leave the teams with exactly the same records in terms of points‚ goal-difference and goals-scored.

That would leave them needing to be separated via their head-to-head record‚ which would see Stellenbosch on top after they won both league meetings this season.

What is clear is that both sides are already assured of a place in the Promotion/Relegation Play-Off places should they not finish top.

The second play-off spot is still very much up for grabs and remains a complicated situation.

Tshakhuma Tsha Madzivhadila currently occupy that space‚ level on points with Ajax Cape Town‚ but ahead on goal-difference.

But complicating the situation is the fact that the PSL have appealed the verdict of their own Disciplinary Committee that essentially gave TTM a slap on the wrist for not fielding the required number of Under-23 players in a recent victory over TS Sporting.

It seems the PSL wants a harsher sanction‚ most likely a points reduction‚ which could change the scenario drastically.

The matter is before an arbiter.

On the pitch‚ TTM host mid-table Richards Bay‚ while Ajax travel to Mbombela United‚ who sit in fifth but also have nothing to play for on the final day.

The second relegation place is also still far from decided with four clubs still in danger of going down.

Cape Umoya United (34 points‚ -8 goal-difference) need just a point from their clash away at safe University of Pretoria.

Most in need of a victory are Ubuntu Cape Town (31‚ -8)‚ who will hope to give themselves the best chance of staying up with a win over Eagles‚ but also do their provincial rivals Stellenbosch a massive favour.