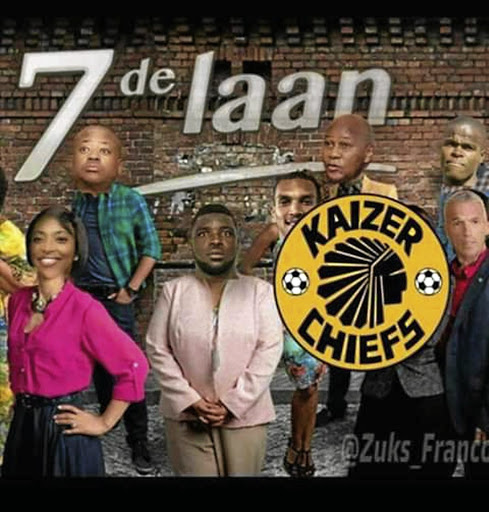 One of the memes about Chiefs 7th position.

Not that the Phefeni Glamour Boys will soon be featured in one of its episodes but this has everything to do with Amakhosi's long-term position on the Premier Soccer League (PSL) log.

Kaizer Chiefs, which is having a season to forget by its former high standards, has been mockingly referred to as 7de Laan after occupying the seventh spot on the log for what seems like eternity.

The 7de Laan jest started in December, when the Naturena-based side, apparently at one stage had seven wins, seven draws, and seven losses in the league while occupying position seven on the log.

After every recent win or loss in the PSL - but mostly draws (11 this season) - Chiefs have been stuck on the position, leading to many 7de Laan jokes on social media after its matches.

Even the fingers-up (two sevens) sign commonly used by Mamelodi Sundowns and their fans are now appropriated without compensation to ridicule Amakhosi and fans about their log position.

With two league games remaining, Chiefs need to win both to stand a chance of shaking off the 7de Laan moniker. For now Chiefs and 7de Laan remain in the same WhatsApp group.