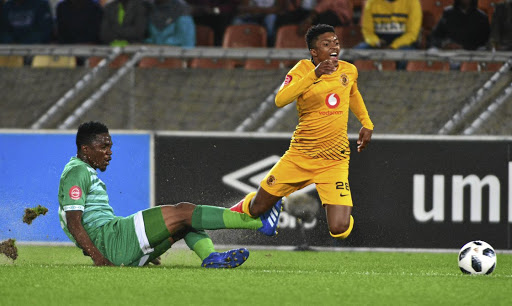 Either Kaizer Chiefs show a big improvement in their next two Absa Premiership games or risk failing to make the top eight.

Fresh from their 1-0 defeat to Bloemfontein Celtic at Peter Mokaba Stadium at the weekend, with Ndumiso Mabena finding the back of the net for Phunya Sele Sele, Chiefs are pondering what's next.

Ironically, Chiefs coach Ernst Middendorp was the man in charge in their worst season ever in 2006/07 when they finished ninth.

By the time Serbia's Kosta Papic took over it was too little too late. Chiefs finished with 42 points that season and are now on 38 points in the current campaign, with two matches remaining. They host Free State Stars at Mbombela Stadium on Saturday and conclude the season away to Chippa United on May 11. Both Stars and United face relegation.

Middendorp was brought in this season to arrest the team's decline under former coach Giovanni Solinas.

Kaizer Chiefs coach Ernst Middendorp says his side are making the same old mistakes game-after-game after losing on Saturday to Bloemfontein in ...
Sport
2 years ago

"I said it before the game [against Celtic] that we need the points to consolidate our position in the top eight," he reflected after the defeat to his former team in Limpopo on Saturday night.

Amakhosi, however, will have to put in a better showing than they did against Phunya Sele Sele if they entertain any thoughts of getting maximum points in their remaining matches to avoid a disastrous finish.

It's also critical for Chiefs to play better, because after their final league match they will play National First Division side TS Galaxy in the Nedbank Cup final at Moses Mabhida Stadium on May 18.

It's now or never for Middendorp's charges. "We make it difficult in certain moments for ourselves and it's definitely not something acceptable," Middendorp said.

Unsurprisingly, Celtic coach Lehlohonolo Seema is very pleased that they managed to get the points to move into position eight with two matches remaining.