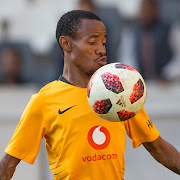 Kaizer Chiefs coach Ernst Middendorp was pleased to see Joseph Molangoane finally play a first game of the season this week‚ and says Lebogang Manyama is another long-term injury sufferer who will make a return before the end of the season.

Molangoane made a return from the ankle injury sustained in preseason in August that saw him not play a match in 2018-19 until coming on in the 75th minute of Chiefs’ 1-1 Absa Premiership draw against Golden Arrows at FNB Stadium on Tuesday night.

The skilful winger or wingback showed some good touches and attempted to run at players‚ as is his fashion.

He seems sure to be on the bench when Amakhosi meet Bloemfontein Celtic at Peter Mokaba Stadium in Polokwane on Saturday night.

“Compliments to Joseph. I was very happy to see him‚ to put him in. He has really worked very hard over the months‚” Middendorp said.

“I know his performance was not really 100%. But you always think that with one cross‚ with one one-against-one‚ with his experience he can put something in place.

“OK‚ that’s how it is – 15‚ 20 minute’s here and there to build him up and get him back to a competitive performance.”

Manyama had been playing an influential role for Chiefs in an unusual central midfield role under Middendorp until he had a serious car accident on the N1 in Johannesburg in October‚ sustaining a fractured elbow.

Middendorp said the player was set for a return then suffered a muscle strain.

“I said it several times that I think Lebogang Manyama is‚ and he was‚ in December going into January‚ was one of the most qualified players in terms of knowing where he has to be calm in terms of decision-making‚ passing and finishing.

“It’s absolutely disappointing that we still have to wait.

“He was already on a good away to be similar to Joseph [in the timing of his return]‚ probably even a bit more advanced.

“But he got a grade 1 muscle issue. For this weekend definitely not. The planning probably is that he can come back against Free State and probably have some minutes.”

Chiefs meet Free State Stars at Mbombela Stadium on Saturday‚ May 4‚ in their penultimate league game.

They will hope that‚ if Manyama can get 15 minutes in that game‚ he might play a slightly greater role in Amakhosi’s final PSL ficture against Chippa United at Nelson Mandela Bay Stadium on Saturday‚ May 11.

That would set Manyama up for some role to play in the Nedbank Cup final against TS Galaxy at Moses Mabhida Stadium on May 18.