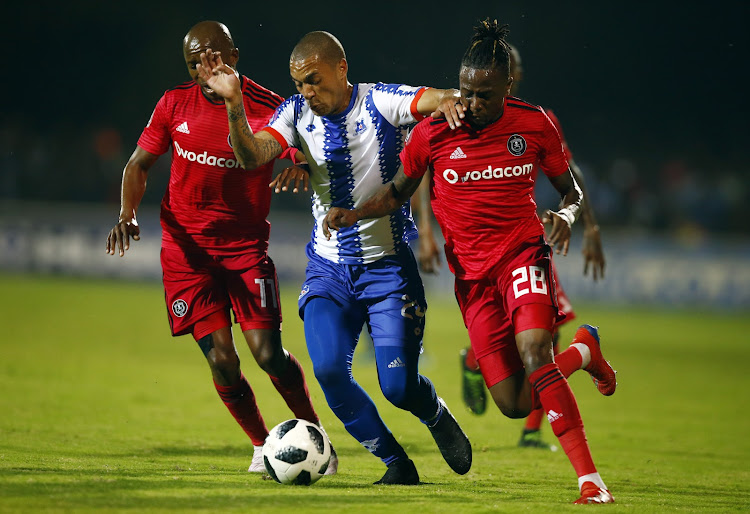 If Orlando Pirates end their six-season league title drought in the 2018-19 Absa Premiership, the tough-as-nails victory they gritted out like champions against last-placed Maritzburg United at Harry Gwala Stadium on Wednesday night will stand out as one of the cornerstone moments in that championship.

Similarly, if United, who remained a desperate four points behind 15th-placed Baroka FC in last place, are relegated, this result in their Pietermaritzburg stronghold, where they had won three of their last four games, will be seen as one of the final nails in the burial casket.

Pirates impressively countered a first-half challenge from desperate United, took control of the game from the break and earned Vincent Pule's 67th-minute winner.

Bucs (53 points from 28 games played) are three points clear of second-placed Mamelodi Sundowns (50 from 27), who have a crucial game in hand, as the title race goes down to the wire, most likely to be decided on the final day.

Maritzburg were naturally keyed up and matched Bucs blow for blow in a first half of fast-paced, end-to-end action.

Pirates had the first chance in the second minute, Thembinkosi Lorch's swerving shot being parried by United goalkeeper Richard Ofori.

Bucs had another opportunity 10 minutes later, and it was a good one. United centreback Brian Onyango gave the ball away in his area to Pule, who fed Lorch, whose shot found the legs of Nazeer Allie for a desperate stop.

Just before the break Pule beat Miguel Timm down the right and a cross-cum-shot flew past the crossbar.

Pirates took control of the game coming out of the change rooms. They piled on the pressure in the 20 minutes from the break.

Bucs opened United with quick, slick passing five minutes into the half, Luvuyo Memela's blocked shot spilling into the path of Justin Shonga, who stabbed wide.

Bucs fairly scrambled their breakthrough when it came, but would have taken a strike any which way.

Again the sheer pace of the passing pried through United's defence, Lorch playing into Shonga in the box, who knocked out to Memela on the right, whose attempt to square came off Ofori onto the chest of Onyango. Pule's outstretched leg got the final touch into goal.

United's challenge by now had faded, as Innocent Maela's strike from a narrow angle was held by Ofori, who blocked again when Lorch beat offside in injury time.