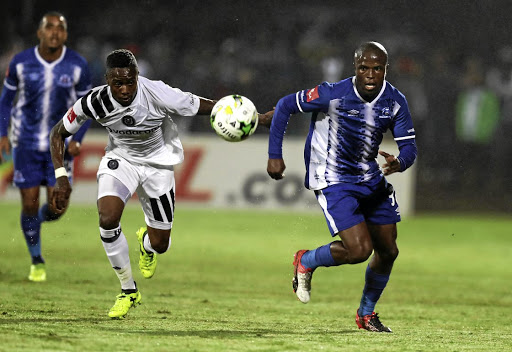 Mthokozisi Dube of Pirates and Mxolisi Kunene of Maritzburg during their league game at Harry Gwala last year.
Image: BackpagePix

If history is anything to go by, Maritzburg United are certain to frustrate Orlando Pirates when the sides with contrasting goals meet at Harry Gwala Stadium tonight (7.30pm).

A trip to the KwaZulu-Natal midlands has not been a pleasant one for Pirates in the past. Bucs last won a league match at Harry Gwala in November 2013. It was Collins Mbesuma's solitary strike that proved the difference that time.

Since this 1-0 victory, the Team of Choice have hosted Bucs at their backyard four times in the league, holding the Soweto heavyweights to three draws and upsetting them with a win once.

Heading into this clash, even Bucs mentor Milutin Sredojevic has acknowledged the difficulty of playing Maritzburg away. However, the Sea Robbers mentor has implied his troops were prepared to go all out in the final stretch.

"We know [Harry Gwala] is not a pleasant stadium to go and play at. No team go there and be a walk in the park. Our players see each and every match remaining as a cup final,'' Sredojevic conceded.

Perhaps a motivating factor for Pirates would be the fact that they are one of the top teams with seven away wins, four draws and just two defeats in 13 outings.

A win for the leaders Bucs will see them remain top of the log, while for bottom-placed Maritzburg, bagging maximum points would only boost their confidence and belief that they can stave off relegation as they will still remain at the basement.

Maritzburg United have offered financial incentives to their players should the club pull off what seems close to a mission impossible surviving ...
Sport
3 years ago

While many are doubting Maritzburg's credentials of avoiding the axe, the club's winger Mxolisi Kunene has not yet given up on their survival hopes, targeting 10 points in their four remaining games.

"Three wins and a draw in our last matches can do it for us, we are not thinking of [relegation/promotion] play-offs, we must fight for survival and as long as we believe, we can achieve that,'' noted Kunene.

Maritzburg, however, are one of the poor teams at home with three wins, six draws and four losses from 13 outings.

They will be without one of their influential players in tricky winger Allan Kateregga.

The Ugandan workhorse, who scored a brace off the bench to inspire the KwaZulu-Natal club to beat Bloemfontein Celtic 2-1 early this month, is suspended after picking up his fourth yellow card against Highlands Park last week.