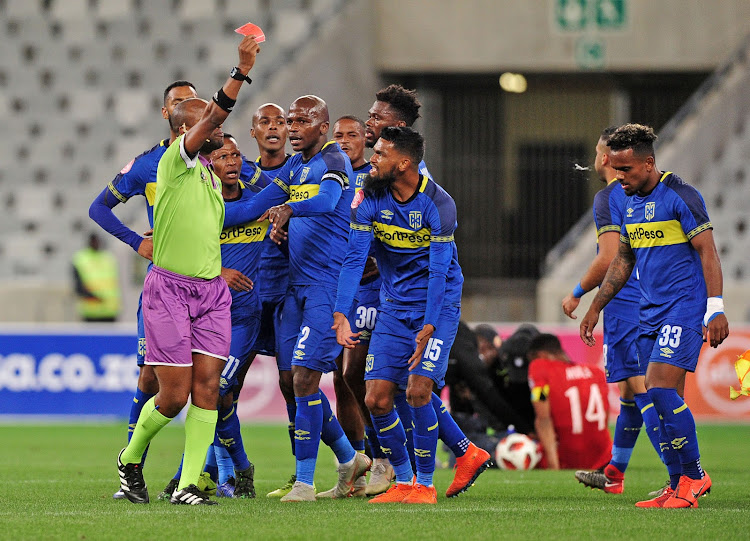 Kermit Erasmus (R) of Cape Town City is given a straight red card by referee Eugene Mdluli for his horrendous foul on Mothobi Mvala of Highlands Park (lying down) during the 1-1 Absa Premiership draw at Cape Town Stadium on April 23 2019.
Image: Ryan Wilkisky/BackpagePix

Tendai Ndoro scored his first goal in almost five months as Highlands Park played to a 1-1 draw with 10-man Cape Town City in the Absa Premiership at a blustery Cape Town Stadium on Tuesday night.

The conditions contributed to a low quality affair, as did a 20th minute red card for Kermit Erasmus, who petulantly swung a boot at Highlands' captain Mothobi Mvala and was deservedly sent to the stands.

Craig Martin equalised late on for City, who to their credit kept attacking throughout the game but have now seen their slender title hopes all but extinguished.

City are nine points behind leaders Orlando Pirates and Mamelodi Sundowns, but do have a game in hand.

Neither goalkeeper had a save to make before Erasmus received the most blatant red card you will see all season.

As he tried to take a quick free-kick, Highlands captain Mvala picked up the ball. A clearly frustrated Erasmus kicked him on the leg, a vicious show of violence that left referee Eugene Mdluli with no option.

The teams squared-off in the aftermath with some handbags thrown, but nothing that required Mdluli to take further action.

It took until the 38th minute form the first real opportunity at either end and it fell to Highlands forward Ricardo Williams, who forced a brilliant close-range save from City goalkeeper Peter Leeuwenburgh.

The home side scrambled the ball clear and Highlands appealed vociferously for a handball from a City defender in the melee, but their pleas fell on deaf ears.

Highlands brought on Ndoro at halftime for his first minutes in six weeks, while City introduced Gift Links.

The home side should have been ahead just minutes into the second period when Links led a quick breakaway and then set up Zukile Kuwetu with just Marlon Hugh in the Highlands goal to beat.

His low shot struck the base of the post though and bounced away to safety in what was a big let-off for the visitors.

Highlands hit the front as Ndoro netted his first goal since scoring against City in the reverse league fixture on December 1, finding space behind the home defence and calmly curling the ball past a stranded Leeuwenburgh.

The visitors began to dominate the possession after the goal and created a few half-chances, with Luckyboy Mokoena testing the palms of Leeuwenburgh and Jabulani Shongwe seeing his goal-bound shot deflected over.

Highlands should have had a second when Mokoena’s superb ball to the back post was somehow turned wide by Peter Shalulile.

Substitute Siphelele Mthembu had the ball in the back of the net after a low pass from Thami Mkhize, but the latter was deemed offside in the build-up and the goal chalked off.

Highlands were inches away from doubling their advantage when Shalulile had only Leeuwenburgh to beat but struck the post, while Taariq Fielies put his body on the line to block the rebound.

City found an equalizer with eight minutes to play, the trickery of Surprise Ralani on the right providing a perfect cross for Martin to head home.

The home side looked the more likely to score after that, but could not force a winner.