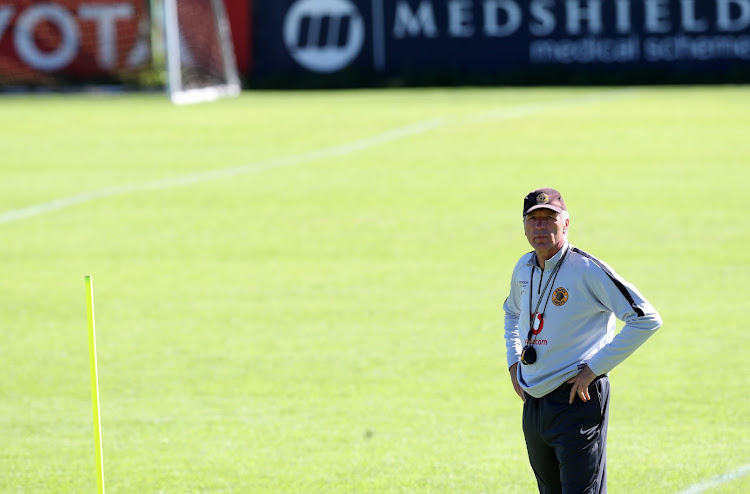 It took a bit for him to admit it‚ but Kaizer Chiefs coach Ernst Middendorp is aware that a victory in this season’s Nedbank Cup can make life “a little bit easier” for him at Naturena.

For Amakhosi‚ negotiating this semifinal‚ then a final of either new First Division team TS Galaxy or Lamontville Golden Arrows‚ is it. This is the biggest team in the country’s last chance at preventing an already unprecedented third season without a trophy becoming a fourth.

Middendorp is surely well aware that ending that trophy drought this season can ease the pressure immensely for next campaign. Going into a fifth season without a trophy‚ conversely‚ can make life that much harder as the expectation and the hype around that grow.

It was put to Middendorp at Chiefs’ media day at their headquarters at Naturena on Wednesday that‚ while there is an awareness that life is not easy‚ a Nedbank Cup win this season could just make it that much easier for the coach in such a tricky hot-seat.

“No I don’t think so‚” Middendorp said‚ sucking air.

“And it’s nothing new. I jumped in here in December. That’s what I did on the 9th of December.

“And OK‚ the fantastic thing was that no-one had to tell me what is expected‚ and that you will get hammered if you are not successful without winning a cup or winning a championship in the near future.

“That’s very clear. There’s no doubt about it at all. I know this. I’m aware about it.”

Then‚ though‚ Middendorp did admit: “Every cup‚ or every success‚ in the end‚ during the run-in to the end of the season‚ now or in the near future‚ if you win the Carling Black Label Cup on July 27 against Pirates convincingly – yes‚ it’s much easier.

“You build up your confidence. You build up as a player‚ as a technical team‚ as a team in general.

“So‚ all this stuff – of course‚ with each and every result‚ with every winning game‚ and probably a good performance in addition‚ it’s definitely something.

“I can agree – it makes life a little bit easier‚ for each and everybody. Because building confidence is part of the story if you want to be successful.”

Chiefs had Leonardo Castro in full training on Wednesday from the calf injury that has kept the centre-forward out since Amakhosi’s polished 2-0 win against Cape Town City in the Nedbank semifinals at Mbombela Stadium two-and-a-half weeks ago.

That did not guarantee the Colombian would be available on Saturday‚ said Chiefs’ communications manager Vina Maphosa.