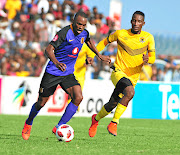 Kaizer Chiefs' league title challenge has gone up in smoke, but coach coach Ernst Middendorp is not going to accept below-par performances.

It's a bitter pill to swallow for the Amakhosi, especially that they've been ruled out of contention by none other than their bitter rivals, Orlando Pirates.

Bucs' 2-1 win over Free State Stars moved them to 50 points and even if Chiefs win all their remaining four outings, they can only reach a maximum of 49 points.

Middendorp, however, wants Chiefs to improve on their currently seventh spot and finish in a respectable position.

"At the moment, we must fight to have a position that's best at the end of the season," said the German mentor.

Middendorp appeared to suggest that challenging for the title was always going to be a difficult task considering he only arrived in December to replace the sacked Giovanni Solinas.

He found Chiefs in 11th on the log with just four victories in 11 games, and though Middendorp started with a 1-0 win against SuperSport United, they were already on the backfoot.

Middendorp reflected: "We had to look at what's possible and I always repeated that. We only started training consistently with the team because before we had international games."

It's not all doom and gloom for the Soweto side, however.

There's still the Nedbank Cup to play for where they meet Chippa United in the semifinals on Saturday at Nelson Mandela Bay Stadium in Port Elizabeth [8.15pm].

It's a make or break situation for Chiefs because failure in the Ke Yona tournament would mean the Glamour Boys finish without silverware for the fourth straight season.