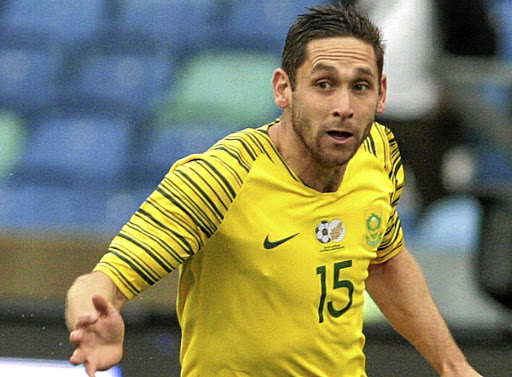 Bafana Bafana midfielder Dean Furman has recalled the painful experience of failing to qualify for the 2017 Africa Cup of Nations (Afcon) and the 2018 Fifa World Cup.

"To be honest, I did not even watch the tournament [2017 Afcon] because it was painful and I felt we should have been there," Furman said.

"Then after that, last year we missed out on the World Cup after a good start in the qualifiers, and that was very disappointing."

But now after those let-downs, the country is back on international stage after qualifying for the Afcon in Egypt this year (June 21 to July 19).

Bafana will know their fate tonight (8pm) when the draw takes place in Cairo.

The 24 teams that have qualified have been divided into four pots, based on rankings. Bafana are in pot three and will have one of the giants (Egypt, Morocco, Tunisia, Ivory Coast, Cameroon or Senegal) in their group.

Furman feels the draw would spur players to fight for a place in the squad for the tournament.

Stuart Baxter has praised Bafana Bafana for responding superbly to new tactics from the coach in a hostile environment beating Libya‚ where the home ...
Sport
2 years ago

"It will be exciting to watch the draw and see who we are going to get. I think the draw will also serve as motivation for the players to work hard in the remaining games in the season," he said.

"The challenge for everyone is to prove to the coach [Stuart Baxter] that you are worthy to be in the squad. It's highly competitive and nobody can take their position for granted."

The 30-year-old SuperSport United enforcer earned his 50th cap in the 2-1 win over Libya last month. The former Chelsea youth player expressed his gratitude after reaching the milestone.

"It is an amazing achievement. When I look at some of the legends who have reached 50 .... it's an incredible list," he said. "It has been a journey and some of the best times in my career, but there has also been some tough times."