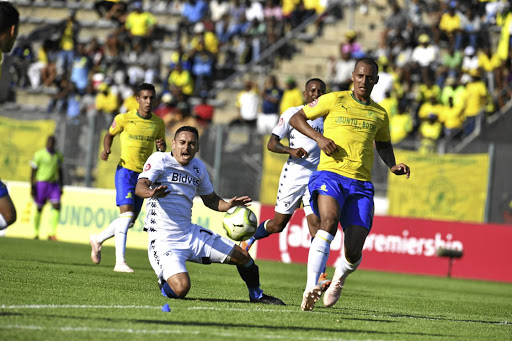 Cole Alexander of Bidvest Wits is fouled by Wayne Arendse of Sundowns. Arendse was fielded against Wits in October even though he was not in Downs' match-day squad. /Lefty Shivambu/ Gallo Images

PSL prosecutor Nande Becker has denied that there is an agenda against Mamelodi Sundowns as perceived by some.

The Brazilians currently have five pending cases against them sitting with the prosecutor.

This season Sundowns have been in trouble with the law on numerous occasions with some charges ranging from minor to very consequential.

Becker has refused the claims that the PSL was treating the Tshwane club unfairly.

"I was actually a director at Sundowns for five years when the club was under the ownership of Natasha Tsichlas so it is untrue," Becker said.

"So it's not that I am against them. Many matters come to my desk, I mean this season alone I have dealt with 50 cases from the 32 clubs in the NFD and Premiership."

Mamelodi Sundowns will know their fate on the Wayne Arendse saga on Friday‚ almost five months after the matter was brought to the attention of ...
Sport
3 years ago

Of the five cases against Sundowns, the most serious of their cases is the one where the club was found guilty of unlawfully fielding defender Wayne Arendse against Bidvest Wits in their 1-1 draw in October.

The guilty verdict was handed down last week, some six months after the match report was given to Becker.

Downs faces a single point deduction and Wits could be handed a 3-0 win which could go a long way in deciding who is crowned champions next month.

The practising attorney, who works part-time as a PSL prosecutor, tried to explain why the matter has taken so long.

Irvin Khoza defends PSL legal actions as fair and above board

"The charge sheet was drafted in November. We then ran into the difficulty of not having a DC chairman available from December 11 to January 15 because our majority of the legal profession is on leave," Becker added.

"The matter was set to be heard on February 6. The matter was then postponed to the 25th of February at the request of the respondent [Sundowns] and a finding was handed down on April 2.

"The date for argument on the issue of sentencing will be on Friday (April 12)."

1. Fielding Wayne Arendse when the player was not on the team sheet in October. Arguments in mitigation of sentence will be heard Friday (April 12).

2. Pitso Mosimane was found guilty of getting into a scuffle with AmaZulu security officer Satchmo Ngwenya in September. The sanction against Mosimane is pending.

3. Mosimane was charged with making improper statements after a match.

5. Misbehaviour of their fans in the match against Wits in February.