Something missing at Chiefs - Middendorp 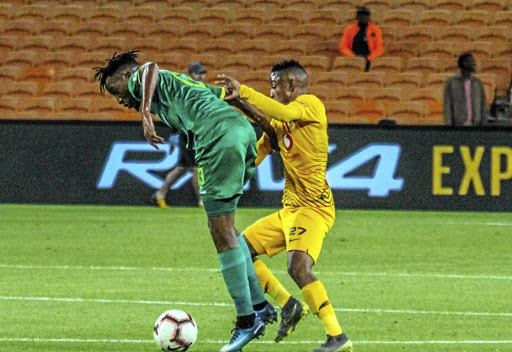 Matome Mabeba is challenged by Pule Ekstein during the Absa Premiership game that Kaizer Chiefs lost at the weekend.
Image: BackpagePix / Lebo Edgar

In the wake of their shock loss to Baroka, Kaizer Chiefs coach Ernst Middendorp suggested that something was missing, and due to inconsistency Amakhosi are now virtually out of the title race.

The Glamour Boys suffered a 1-0 defeat against the relegation-threatened Baroka at the FNB Stadium on Saturday evening, courtesy of a Tshidiso Patjie strike.

Middendorp conceded that a late challenge in the Absa Premiership was out of their reach.

"I know that we have a certain complacency and there is a little bit more work to do," said Middendorp.

"It's not really surprising for me. I know that something is missing and is not there to have a consistent successful run; I know it and see it every day."

Chiefs are seventh in the league standings with 36 points after 25 games - eight points behind table toppers Orlando Pirates.

Amakhosi were brought back down to earth after having progressed to the Nedbank Cup semifinals the previous weekend.

The German-born tactician saw the defeat coming in the days leading up to the weekend encounter.

Kaizer Chiefs coach Ernst Middendorp has said that he had a feeling during last week that his players might not have the right intensity to beat ...
Sport
3 years ago

"We worked and stopped training and said 'guys this is not how we prepare for a game'," said Middendorp.

"It's like you have a fantastic car but do not have fuel. If the fuel is not there, then it's not enough and that's what I see."

Middendorp all but admitted that his players believe they have a better chance of winning the R7m cup than attempting to chase down the league leaders.

"I don't support this, definitely not. It's not acceptable to push your heart off in a cup competition and then play like that against Baroka. That is not something we want to see.

"I can't deny it. I mean it's the same players, same structure and set-up. Six days later and we had the recovery time, so what's missing?"

Chiefs' next opponents are Black Leopards at Thohoyandou Stadium on Saturday.