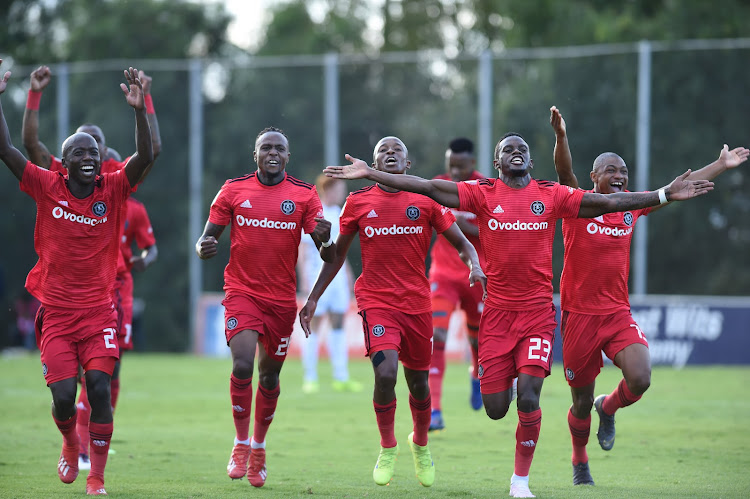 Orlando Pirates players celebrate their winning goal during the Absa Premiership 2018/19 game between Bidvest Wits and Orlando Pirates at Bidvest Stadium in Polokwane the on 06 April 2019.
Image: ©BackpagePixc

Orlando Pirates coach Milutin Sredojevic refused to accept that their last-gasp 1-0 win over Bidvest Wits in Milpark on Saturday was an undeserved one on an afternoon they showed little appetite to reproduce the kind of attacking football they had dished out against Mamelodi Sundowns on Monday.

Pirates’ win‚ courtesy of an injury time own goal by Wits left back Keagan Ritchie‚ saw Bucs move to the top of the Absa Premiership table on goal difference to Sundowns‚ but the Brazilians still have an advantage of a match in hand.

“Look‚ I will disagree with saying this was a stolen win‚” said an elated Bucs coach.

“Right at the death we have won. I don’t believe that this victory was stolen‚ I believe that we deserved it because that’s what football Gods are paying us for all the draws we have played.

“This is how sometimes football Gods are taking from you. Football takes time.”

Sredojevic said it was always going to be difficult to beat Wits as they had come to Milpark knowing they had last beaten them at their compact venue in 2013.

If Kaizer Chiefs are serious about a decent Absa Premiership finish they will need to produce performances than their flat 1-0 defeat against log ...
Sport
3 years ago

“Today we had a situation that since 2013 Pirates had not beaten Wits here and we had come with that at the back of our minds. Players fought very hard and we were awarded with that goal.

“But in the same moment there are so many critical things that we need to go back to the drawing back and look to fix in the next match.

“We have played against a very good team that had a specific way of playing and doesn’t allow you to express yourself the way you want.

“We had to adjust to them and in that I could say the game could have gone either way.”

Sredojevic said he was relieved they will host Black Leopards on Wednesday with his best player this season‚ Thembinkosi Lorch‚ back from suspension after missing the Wits match.

Wrestlemania fever kicked into high gear here on Sunday as the countdown to the WWE's biggest event of the year continues.
Sport
3 years ago

“We want first to recover from this match and we are welcoming back Lorch from suspension and we are expecting to come fully focused on the Wednesday match.

“I want to invite our supporters to come and support us because their presence is a special driving force and drives players over the human sports limits and they are helping us to give our best.”

Pirates have a chance to further stretch their lead at the top of the table and put Sundowns under pressure.

After playing Leopards on Wednesday night Bucs will again host Free State Stars on Saturday before Sundowns‚ who have a chance to make the semi-finals in the Caf Champions League after their impressive 5-0 first leg win over Al Ahly on Saturday‚ play against SuperSport United on April 17.