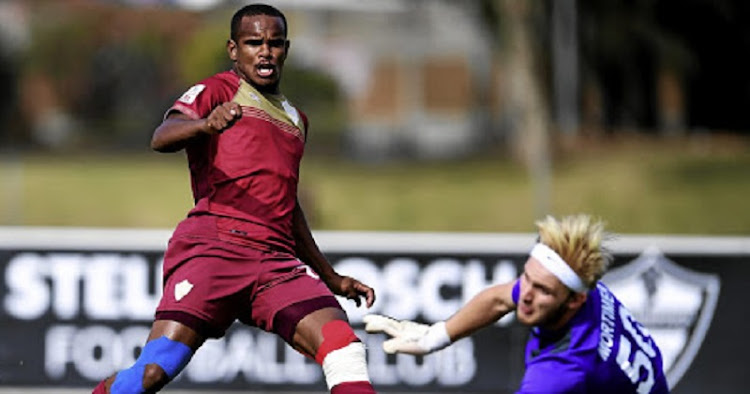 Iqraam Rayners of Stellenbosch FC set a target of 20 goals this season, but it looks like he can get more.
Image: Ashley Vlotman / Gallo Images

National First Division (NFD) top-scorer Iqraam Rayners of leaders Stellenbosch is gunning for Phumelele Bhengu's record of 22 goals he achieved in the 2014/15 campaign.

Rayners, 23, looks certain to scoop the NFD golden boot at the end of the season after netting his 16th league goal of the campaign in their 5-0 home drubbing of University of Pretoria at the weekend.

"My target was initially 20 goals but now I think I can go on and score more than that. I am keen on winning the golden boot. I can also break Bhengu's record... I am confident," Rayners told Sowetan yesterday.

NFD side Stellenbosch FC have put themselves on the path to automatic promotion and a return to the top-flight for coach Steve Barker.
Sport
2 years ago

"I would not have scored these goals without my teammates. It has always been about the team. Mine is only to contribute to the team's goal, not take credit."

The lad from Netreg, near Cape Town, asserted that hammering AmaTuks has boosted their morale as they had lost two matches in a row (3-2 to Tshakhuma Tsha Madzivhandila and 1-0 to Real Kings) before facing the Tshwane-based outfit.

"After two losses in a row, to bounce back like that against AmaTuks was remarkable. It has renewed our confidence."

"If we can win three of our last five games, we will surely clinch automatic promotion."

The NFD top marksman refused to be drawn into rumours that Mother City's top-flight club, Cape Town City, were interested in his services.