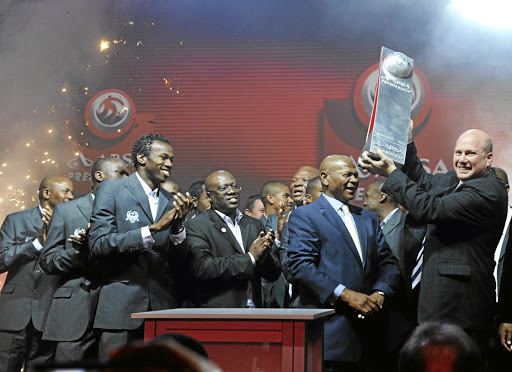 Stan Matthews and SuperSport staff celebrate winning the league on May 24 2009 in Johannesburg./Lefty Shivambu / Gallo Images

When SuperSport United was established, few imagined it would become a dominant force in local football.

But they have proven their doubters wrong and will now be celebrating their 25th anniversary this year.

When the club was founded in 1994 few could dare challenge the dominance of Orlando Pirates, Mamelodi Sundowns, Moroka Swallows and Kaizer Chiefs.

But Matsatsantsa a Pitori set out on a new path of creating a competitive club on the football scene with an academy that would leave an indelible mark.

Surplus cash will go to top players, not new signings
Sport
2 years ago

"When this club started we did not even have an office; it was run from a desk," club chief executive Stan Matthews told Sowetan.

"To go from that to starting an academy that has produced countless national team players and becoming a competitive club that has won numerous trophies is testament to the hard work that has been put in.

"We are tremendously proud of what we have achieved and become the fourth-most-decorated club in the PSL."

Thuso Phala has surprisingly singled out SuperSport United chief executive Stan Matthews in his farewell statement despite a tongue-lashing from the ...
Sport
2 years ago

Matthews, who joined the club in 1999, paid homage to the forebearers of the club for sticking to their guns in the early stages.

"SuperSport International, who started the club, have been tremendous for us under the leadership of Khulu Sibiya, Nolo Letele, Imtiaz Patel and Makhulu Ledwaba."

The club still has an outside chance to commemorate a quarter of a century of existence by clinching the Absa Premiership title with rookie coach Kaitano Tembo, who has been with the club for 19 years.

With six games left, they are fifth in the standings with 39 points, four behind leaders Mamelodi Sundowns.

"I wouldn't say we are in with a chance but we are in a good position where we can compete and give a good a account of ourselves," Matthews said.