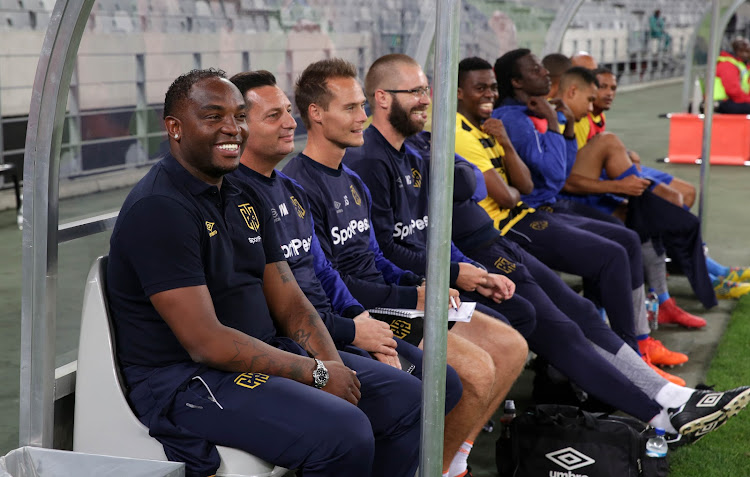 Benni McCarthy says his Cape Town City will go into their Nedbank Cup quarterfinal at Kaizer Chiefs on Sunday with “guns blazing”‚ but has acknowledged too that their hosts possess plenty of quality ahead of their tie at the Mbombela Stadium.

City have already claimed the MTN8 earlier this season‚ a first trophy of McCarthy’s coaching career‚ and might view Chiefs and Bidvest Wits as their major remaining hurdles in adding the Nedbank Cup.

They can therefore oust one of their major challengers at the quarterfinal stage‚ and McCarthy has acknowledged this is a big opportunity for his team.

“We know we have to go guns blazing – we will go all out and we know we will have to play a perfectly-executed game against Chiefs if we want to have any chance‚” McCarthy said.

“We will try and be solid‚ and nice and compact‚ we want to control the ball‚ we want to be the ones to dictate the way we play and the pace we play with.”

McCarthy said Chiefs have changed their style under coach Ernst Middendorp‚ who took over from Giovanni Solinas earlier in the campaign. He admitted Amakhosi have plenty of quality in the attacking third to hurt his side if City allow them too much room to play.

“The last few games analysing Chiefs‚ since Middendorp has come in they have become a ‘transition’ team‚ they try to hit teams on the counter‚ which they are exceptionally good at. The focus for us is to try and stop that‚” McCarthy said.

“With the experience and quality that Bernard Parker possesses‚ when he gets an opportunity‚ for me he is still one of the bests strikers we have out there in the modern [South African] game. He is very intelligent.

“Khama Billiat‚ on his day‚ when he is in the mood for football and the mood to play‚ then you know you are going to be on your heels – you have to be switched on. He is one of the most lethal players we have in the league.

“Then you have Leonardo Castro‚ he is probably the main focus for Chiefs because everything goes through him.

“His aerial ability‚ his intelligence‚ his hold-up play‚ how he interlinks. Chiefs go very direct at times‚ straight to Castro and then he brings other players into play‚ Billiat and Parker running off him.

“Then there is George Maluleka‚ [Dumisani] Zuma‚ whoever plays in that No 10 position. They attack with numbers.”

McCarthy feels the battle may be won in the middle of the park‚ with his key focus getting the ball to his pacey wingers.

“If we can control the midfield‚ we give ourselves a great opportunity because everybody knows we are comfortable on the ball. Our midfield ball rotation is good‚ then we use the pace of our wide men.

“We will sit and design a play that we think can cope with what Chiefs have to throw at us. When we get the opportunity‚ we will try and hit them where it hurts the most – with speed.”

City had a number of players away on international duty‚ but McCarthy confirmed that all have returned with a clean bill of health.

“We have got everybody back. [Thamsanqa] Mkhize is back from Bafana duty‚ where he served his country extremely well.

“Gift Links and Keanu Cupido are also back from the Under-23 side. [Mozambique international] Edmilson has returned‚ all our players are looking good.

“The ones who stayed behind with us‚ we had a really good week‚ with excellent training sessions.

“The quality has been really good – as a coach I cannot complain about the preparations that we have had.”