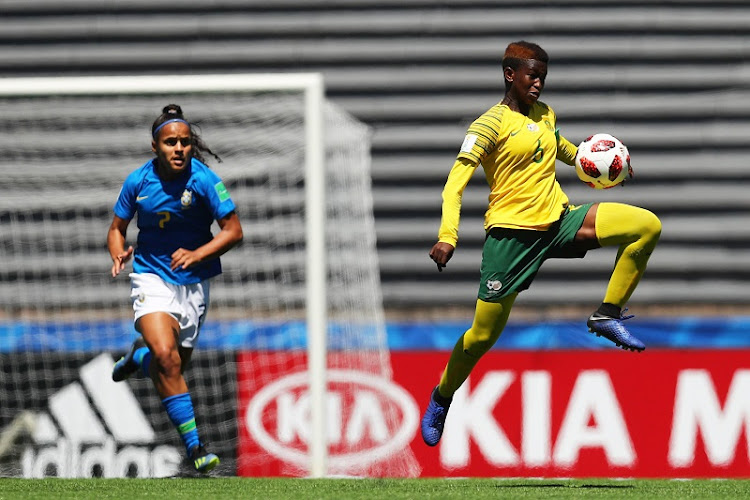 Sibulele Holweni captained the U17 women's team at the World Cup in Uruguay.
Image: Maddie Meyer - FIFA/FIFA via Getty Images

Banyana Banyana coach Desiree Ellis was this week in Durban to officially launch the historic clash against Jamaica in an international friendly match set for next month at the Moses Mabhida Stadium.

Accompanied by, among others, the president of SA Football Association Danny Jordaan, as well as deputy mayor of eThekwini municipality Fawzia Peer, Ellis also took the opportunity to announce the squad that will face the Reggae Girlz.

The former Banyana captain kept the bulk of the squad that has been doing business for her since the 2018 Cosafa Women's Championship - but she brought six new faces that did not participate in the 2018 Cyprus Women's Cup.

Rachel Sebati (TUT-PTA), Ode Fulutudilu (Malaga, Spain) and Jessica Williams (Spurs WFC, CT) get a recall after being in and out of the squad in recent times.

Ellis has also given a chance for a look-in to Sibulele Holweni (HPC), who was the captain of the U17 women's national team in the World Cup in Uruguay, as well as Yonela Ketu (Thunderbirds FC, Port Elizabeth) and Bongeka Gumede (TUT-PTA).

"We are in the final stages of our preparations and as you can see, there is not much tampering with the squad - the core is still there, and we feel we still have a chance to try out a few players to see what they can offer," said Ellis.

"We were in Cyprus recently and we saw and learnt a lot there and we are happy with the squad at the moment."

Ellis is also excited to be facing fellow debutants at the Fifa Women's World Cup, Jamaica, and looks forward to the match.

"We have had tough European opponents in the last few weeks, and we are glad to be facing a team with a different style because the main aim of this match is World Cup preparations, and that will help a great deal."

The historic clash, which will serve as part of preparations for the Fifa Women's World Cup in June in France, will take place on Sunday April 7 (3pm).