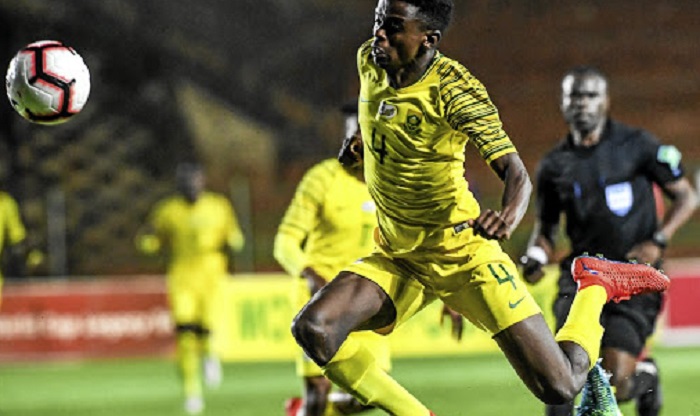 Teboho Mokoena on the attack during the U23 Afcon qualifier against Angola in Johannesburg on Tuesday.
Image: Sydney Seshibedi /Gallo Images

SA U23s' 3-0 win over Angola at Bidvest Stadium on Tuesday was a very good result, but Tiyani wa ka Mabasa observed our young lads can do even better...

What they did right

Defending as a team

No doubt coach David Notoane's approach is about taking the game to the opposition and rightly so, because they have Phakamani Mahlambi, Luther Singh and Lyle Foster - just to mention a few attacking players.

But what's also important is that they defend as a team and Angola rarely created any chances. Little wonder then that they conceded just one goal in the two matches, which they won 6-1 on aggregate.

The other element of their game, which is quite pleasing, is that the central midfield led by Athenkosi Dlala and Teboho Mokoena over the two legs, is dominant over the opposition.

Angola were then forced to try using the flanks to create opportunities, but even there they had little breathing space.

South Africa Under-23 coach David Notoane expects a tough encounter against Zimbabwe in June‚ in a qualifier where the winner will reach the 2019 ...
Sport
3 years ago

The tendency to overdo things

It goes without saying that Mahlambi and Singh are exciting players, but sometimes they tried to beat one defender too many.

Mahlambi beat a few defenders and with the crowd cheering, it gave him the confidence to continue dribbling and by the time he was ready to release the ball, the teammates would be closed down.

Even Notoane admitted that the strikers' final pass leaves a lot to be desired.

"We are happy with the start that we've had and winning away was very important," Notoane told the media
after the match in Johannesburg.

"We know the attacking prowess that we have - the speed of Phakamani, Lyle and Luther, that's a big weapon that we have. But the decision- making in the last third is still an area that I'm not happy with," coach Notoane admitted.