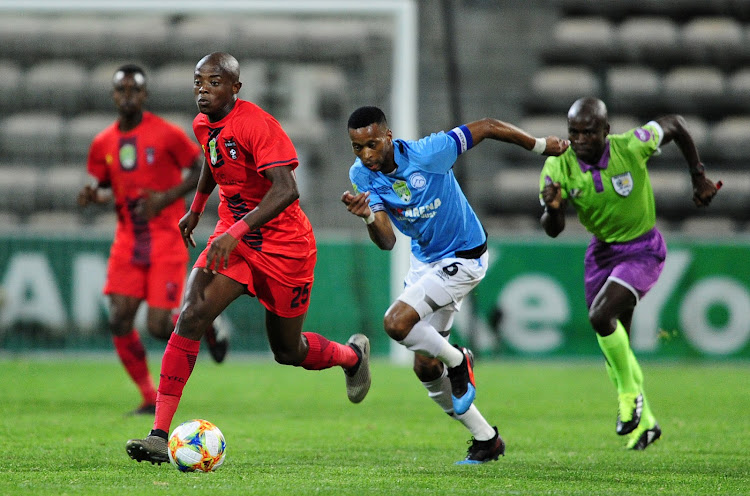 TS Galaxy recovered after conceding an early goal to turn the game on its head and beat Cape Umoya United 2-1 to win their Nedbank Cup quarter-final on Wednesday with a late winner from Sizwe Mdlinzo.

The deciding goal arrived just two minutes from time as the Mbombela-based side overcame an early onslaught to snatch an unlikely win.

Katlego Oladitsa had Cape Umoya in an early lead but after squandering more chances to stretch their lead Zakhele Lepasa equalised with a penalty just before the break.

Galaxy are the first side through to the semifinals, and also the first club from outside the top flight to make the last four of the cup since Baroka, then also down in the National First Division, three years ago.

Coach Dan Malesela has kept up his record of cup progress. “I need to be tough in the change room at halftime”.

Cape Umoya could well have wrapped the game up by half-time after taking a 14th minute lead when Brandon Theron clipped in a perfect cross from the right that left Otladisa with a simple header run in front of goal, which he calmly took with aplomb.

It should have been 2-0 when Gavin Hammers caught the goalkeeper Ludwe Mpakumpaku in possession well outside of his penalty area and was clear on goal, albeit from an angle and with defenders chasing back.

But instead of backing himself and going for goal he played a weak square ball in search of a teammate and a golden chance went abegging.

TS Galaxy had not even taken a shot on goal, nor won a corner, when they were awarded a penalty one minute before the break for a handball by home defender Roscoe Pietersen.

Zakhele Lepasa, who had made the preliminary squad for the under-23 national side, stepped up to score a fifth goal in his last four outings and take the game into half-time on level terms.

Galaxy were much stronger after the break keeping Cape Umoya keeper Dino Visser on his toes. But their winner arrived with a touch of a good fortune as Mdlinzo mistimed his shot but it hit his knee and flew into the net for an 88th minute winner.

“Our guys looked tired near the end and we got punished as they created more chances than us,” said vanquished coach Dominic Isaacs.