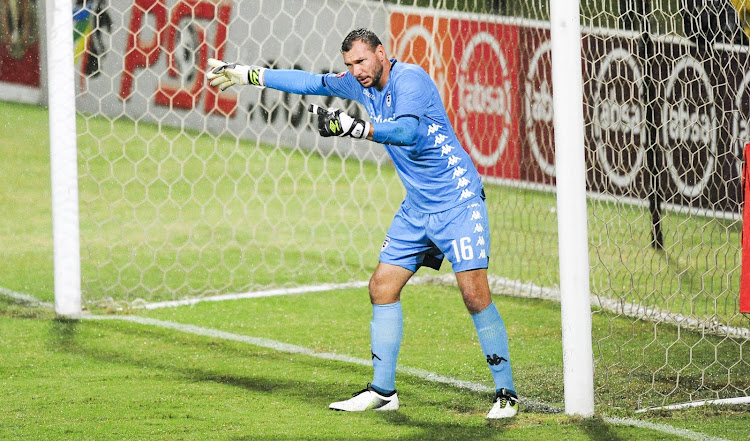 Darren Keet of Bidvest Wits during the Absa Premiership 2018/19 game between AmaZulu FC and Bidvest Wits FC at King Zwelithini Stadium in Durban the on 09 March 2019.
Image: © Gerhard Duraan/BackpagePix

Bidvest Wits and Bafana Bafana goalkeeper Darren Keet says he would turn down Mamelodi Sundowns even if Patrice Motsepe's champions dangled a R1-million per month carrot in front of him.

Keet's contract is set to come to an end in the coming weeks but he insisted on Wednesday that he would either remain at Wits or move to an overseas team.

“I would love that‚ I would love to see that‚” joked Keet when asked what would he do if Sundowns were to dangle a R1-million per month carrot in front of him.

“There’s no reason for me to leave and any money any other club can offer‚ Wits can pay me also.

“So it’s not even about the money‚ it’s not about anything for me.

"We’ve got more chances of winning the league (at Wits) than at other teams‚ so there’s no reason for me to even bother or want to leave.”

Keet became an instant hero in South Africa on Sunday night after his stunning display against Libya prompted Bafana supporters to add “Kity Kity” to his list of nicknames.

Bafana qualified for the African Nations Cup after the encounter and the keeper's breathtaking saves contributed to the away 2-1 win that guaranteed the ticket to Egypt.

Question about Keet’s future were always going to come up after that performance but he shot them down.

“Obviously there’s talk‚ and there’s always going to be an interest in players around South Africa and it’s no different for me‚" he said.

“My contract is coming to an end and if a player is free it makes it easier for a club because they don’t have to pay the transfer fees and things like that.

“No I’m not going to do things like that (joining Sundowns).

"I’m not looking to join any club in South Africa.

“If there’s no overseas club I will stay at Wits.

"Like I said‚ there’s no better place for me than right here.

"My family is happy‚ the club likes me and I like the club.”

Keet said there have been no concrete from Europe yet.

He returned to the Clever Boys in 2016-17‚ the year the club won their first Absa Premiership title.

“I don’t know yet‚ we are looking at all options‚” said Keet.

“There’s always a few clubs looking but there’s no team at the moment that has shown an interest.

"But that’s why you always have people looking around for you.

“There’s nothing that has become available yet but it’s still early in the year.

“At the moment I’m not too bothered.

"I just want to win the league and make sure that we do whatever we can to win the Nedbank Cup also. And that’s all that matters.”

Wits host Chippa United in the last 8 of the Nedbank Cup at Bidvest Stadium on Saturday.