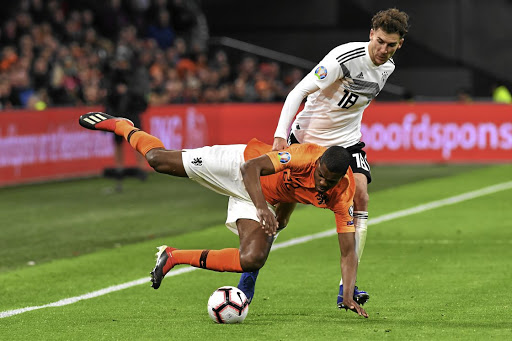 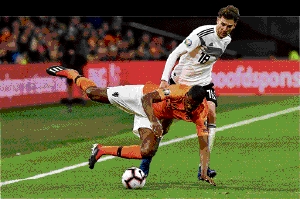 Germany coach Joachim Löw was lavished with praise yesterday after his team snatched a late win over the Netherlands in their opening Euro 2020 qualifier on Sunday.

Löw has been under enormous pressure since Germany crashed out of the World Cup and suffered relegation in the Nations League last year.

In recent weeks, he has faced growing criticism for his decision to drop veteran stars Thomas Müller, Mats Hummels and Jerome Boateng from the national team.

Yet after Sunday's dramatic victory in Amsterdam, the 59-year-old appears to have got the German media back on his side.

"Löw delivered in the first truly important game since the World Cup, and showed up everyone who said he is no longer the right man for the job," wrote Bild yesterday.

"A victory for the coach!" read the headline in Kicker magazine.

"Löw has managed to unite this young team behind him," the magazine wrote.

The praise marks a decisive change in tone from the recent criticism. Just last week, Die Zeit newspaper summarised the mood around the Germany team with the headline "Löw versus everyone else".

On Sunday evening, the Germany coach played down the idea that he had stuck it to his critics with victory over the Netherlands. "I don't see the win as an act of vindication," he said.

Löw hailed the last-gasp victory over the Netherlands as an important step in the rebuilding process for his team.

Here's who our sports reporters think will win the World Cup

It is one of the most anticipated sporting events in the world.
Sport
1 year ago

Nico Schulz scored a last minute goal to hand Germany a 3-2 triumph at the Amsterdam Arena in their opening Euro 2020 qualifier as Löw looks to reconstruct a side who were world champions in 2014, but flopped badly in Russia last year.

They were then relegated from the Uefa Nations League after poor results in the second half of 2018.

"A game like this belongs to the process which such a young team must go through," Löw said after the match, where Germany were 2-0 up at halftime after goals from Leroy Sane and former Arsenal man Serge Gnabry but allowed the Dutch to come back and equalise.