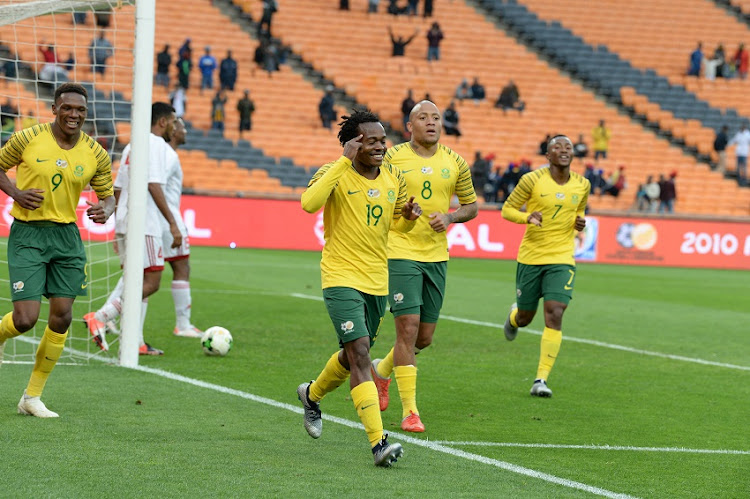 Percy Tau has become the go-to man for attacking creativity for Bafana Bafana‚ but says he does not feel any added pressure that this status might have created on him as the South Africans seek a draw against Libya to qualify for the Africa Cup of Nations.

Tau – the small‚ pacey‚ skilful and deceptively destructive former Mamelodi Sundowns forward currently finding his feet with impressive performances and goals in the Belgian second division – will be aware of his status as Bafana’s star creator of goals.

Playing behind big Strasbourg centreback Lebogang Mothiba‚ the man currently expected to bang in goals for Bafana‚ Tau is the man SA look to for the moment of genius and creative spark that can lead to breaking down a defence.

The Union Saint-Gilloise forward does not believe this has added pressure on his slender shoulders.

“Not at all. I never put pressure on myself‚ I never think there’s pressure‚” Tau‚ the Premier Soccer League’s Player of the Season in 2017-18‚ said.

“Because we are 11 guys on the pitch and everyone has a role to play.

“I’m always on the lucky side that I have to finish the goals. But everyone has a role to play and we are excited that we have been handed those roles. And I will just roll with that.”

With Mothiba having missed the corresponding 0-0 draw with the Libyans in Durban in September‚ and Tau having been a little flat that game‚ the pairing can be the weapon needed to create havoc on Sunday.

A man expected to win possession in central midfield and turn it into attacking ball for the strike partnership‚ Kamohelo Mokotjo‚ said Bafana have had enough preparation time to negate their notorious mental frailty when confronted with pressure situations.

“We deal with the pressure by forgetting about the past and staying in the here and now‚” the classy Brentford midfielder said.

“We’ve played Libya before so we know how they want to set up. And we have had a week to prepare.

“That’s more than enough for us to get the desired result and for us to go through to the Afcon.”

The weather in Sfax – the coastal city where Bafana arrived on Thursday having initially camped in Tunisia capital Tunis‚ 270-kilometres away – has turned a Mediterranean winter wet and chilly.

“I think it’s an advantage to all our players. The wetter it is the better. Because we play a quick style of football‚” Mokotjo said.

Libya have to play in neighbouring Tunisia due to the unstable security situation in their country.