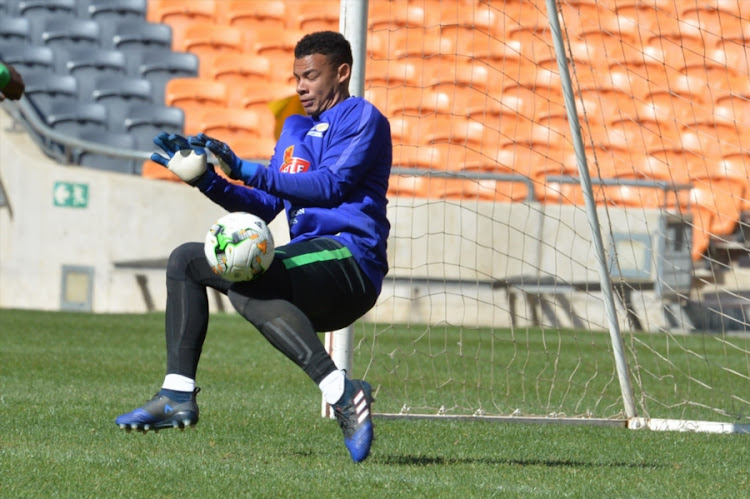 Ronwen Williams is the favorite to start against Libya.
Image: Lefty Shivambu/Gallo Images

Stuart Baxter has been assessing Darren Keet and Ronwen Williams’s confidence and form in training close-up camping in Tunis this week‚ and will make a decision based on that who will be Bafana Bafana’s goalkeeper against Libya on Sunday.

Baxter was reluctant to commit before South Africa left this past weekend for Tunisia for their must-draw or win 2019 Africa Cup of Nations (Afcon) qualifier on which of the two – with Bruce Bvuma taken as a third-placed understudy – was the front-runner to be in goal.

Bafana’s talismanic No 1 Itumeleng Khune‚ who kept his team in the game with some acrobatic saves in the 0-0 draw against Libya in Durban last year‚ is out injured.

“I wouldn’t like to say who the frontrunner is. Because I think they’re so close that if one of them has a bad week‚ or one has a very good week‚ it’ll be that close‚” Baxter said‚ unwilling to commit on who he might have in mind for a potentially tough goalkeeping evening at the 25‚000-seater Stade Taieb Mhiri in Sfax on Sunday.

“I think when we see them in training‚ and who’s dealing with it best‚ and when we see who’s the one who is embracing it better‚ they’re that close that I’m guessing that person will get the nod.

“I think if you’re talking purely generally then Darren is a calmer sort of person. But ‘Ronza’ [Williams] is capable of a big performance – a really big performance.

“You know‚ one of the saves against [Kaizer] Chiefs the other night [in a 1-1 draw for SuperSport United]‚ when he got out and smothered – I think he’s capable of that.

“But to do that you’ve got to be in good mental balance. And that’s what we’re going to look at on the camp.”

Keet has the greater experience. The 29-year-old played five seasons in Belgium for KV Kortrijk‚ where he was player of the season in 2013. He has been the longer-time Bafana understudy to Khune than 27-year-old Williams.

Both keepers’ clubs‚ Keet’s second-placed Bidvest Wits and Williams’s fifth-positioned SuperSport‚ are among the frontrunners in the Absa Premiership. But both keepers are capable of a shaky 90 minutes‚ and Keet has conceded 25 goals in 24 league games‚ and Williams 21.

Both have also had their experiences of blowing their chance with unconvincing performances filling in for Khune for Bafana in the past.

Keet made a hash of the opening match of the 2015 Afcon finals in Equatorial Guinea in 2015‚ gifting Algeria two soft goals after Bafana had taken a 51st-minute lead through Thuso Phala‚ as SA lost 3-1.

Williams famously had his international nerves frazzled by Neymar as a young keeper when Brazil thrashed SA 5-0 in a friendly at FNB Stadium in 2014.

His shakiness starting against Cape Verde away in a World Cup qualifier in 2017 played a role in a 2-1 defeat that set off a chain of events that saw Bafana fail to qualify for Russia 2018.

Despite Baxter’s reluctance to commit‚ though‚ surely the taller Keet must be the safer bet against Libya‚ who the coach said in Durban are strong on crosses.

Keet has recovered from his nightmare against Algeria with four competent appearances in friendlies for SA since 2015.

Neither keeper is of the consistent class of Khune. But surely Keet comes the closest.