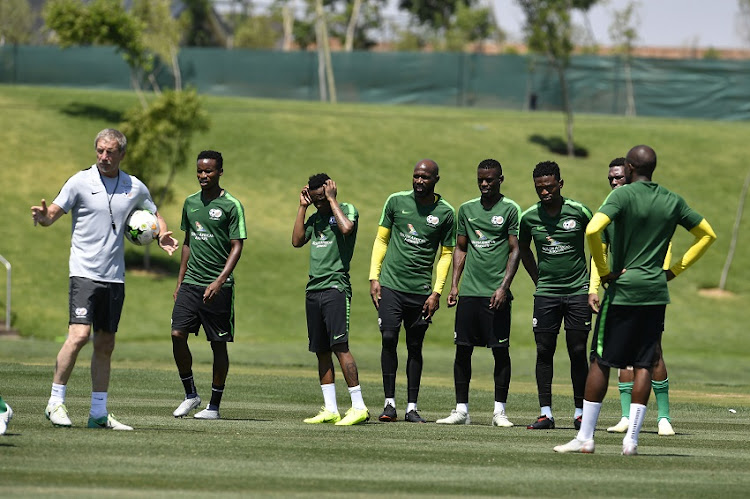 Bafana Bafana head to North Africa for their crucial Nations Cup qualifier against Libya on Sunday with a mixed record in that part of the continent.

Bafana must avoid defeat to the Libyans in neutral Sfax‚ Tunisia‚ in order to qualify for the Nations Cup finals in Egypt that will be played in June-July‚ something they have managed away against North African teams in more than half of their previous games.

In fixtures away at the home of their opponents‚ Bafana have two wins and two draws from seven matches‚ a decent return in what is arguably the most difficult part of the continent to go and get a result.

Sfax may be neutral‚ but is also a ‘second home’ to the Libyans‚ who have played a number of matches there down the years and will likely enjoy some good local support.

Bafana have drawn on their last two visits up North‚ holding Egypt to a 0-0 stalemate in a Nations Cup qualifier in 2011‚ a game they might well have won.

Tokeloi Rantie then got the only goal as they drew 1-1 with Morocco in a friendly in 2013.

Their victories were both in friendly games‚ beating Tunisia 2-0 in 2004 as Benni McCarthy and Tyren Arendse‚ on debut‚ scored the goals.

They also claimed a 2-1 victory over Egypt in a warm-up game ahead of the 2006 Nations Cup finals‚ but went on to lose all three matches at the tournament without scoring a goal.

They have also suffered three losses down the years‚ to Tunisia in 2003‚ and against Egypt in that same year and 2006.

Bafana held their first training session on Monday and coach Stuart Baxter was pleased with the commitment and energy shown by the players.

“We had a good session. We worked on some tactics during our 90-minute session‚ and I am impressed with how the players have responded. They are all looking very sharp and ready to compete for a place in the first eleven‚” he said.

“We have a great squad here and I believe that if we can work as a unit‚ have tactical discipline and enjoy the match against Libya‚ we will come away with the much need result‚” said Baxter.

BAFANA’S RECORD IN THE HOME OF NORTH AFRICAN TEAMS

BAFANA’S MATCHES IN THE HOME OF NORTH AFRICAN TEAMS