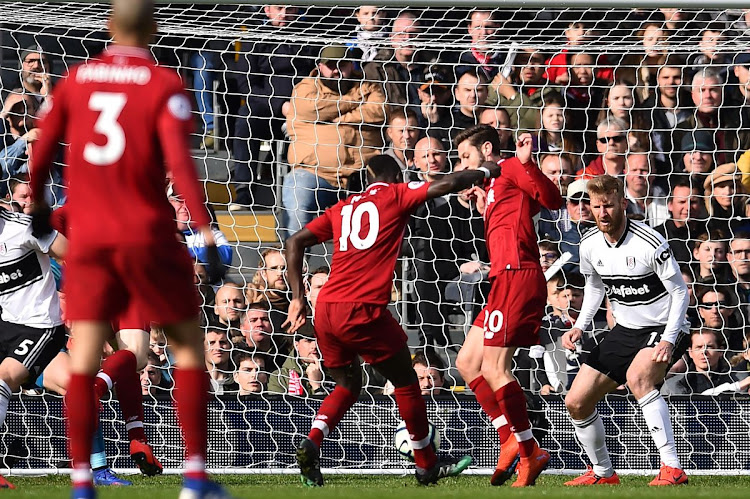 Liverpool's livewire Sadio Mane scored one goal and played a crucial part in the other as they reclaimed the Premier League's top spot with a scrappy 2-1 win at second bottom Fulham on Sunday.

It had looked like being a frustrating day for Juergen Klopp's side after Mane's opener was cancelled out by Ryan Babel following a mistake by Virgil van Dijk, but substitute James Milner slotted home an 81st-minute penalty to take the points.

Liverpool have 76 points from 31 games, two more than champions Manchester City who have a game in hand.

Fulham have 17 points and a mountain to climb if they are to avoid almost certain relegation from the top flight.

Mane scored his ninth league goal in as many games when he fired the visitors into a 26th-minute lead with a classy finish which typified Liverpool's attacking mentality under Klopp.

The Senegal forward exchanged a blistering one-two with Roberto Firmino before he buried his shot from eight metres past Fulham keeper Sergio Rico, who then denied Andy Robertson and Van Dijk either side of halftime.

A calamitous Van Dijk error gifted Fulham a 74th-minute equaliser, as his poor header back to keeper Alisson Becker was intercepted by former Liverpool winger Babel who stroked the ball into an empty net.

Another howler, this time by Rico, decided the contest as the keeper spilled a tame Mohamed Salah shot and then hauled down Mane who pounced on the rebound, leaving Milner to stroke home the winner from the spot. (Writing by Zoran Milosavljevic; Editing by Toby Davis)