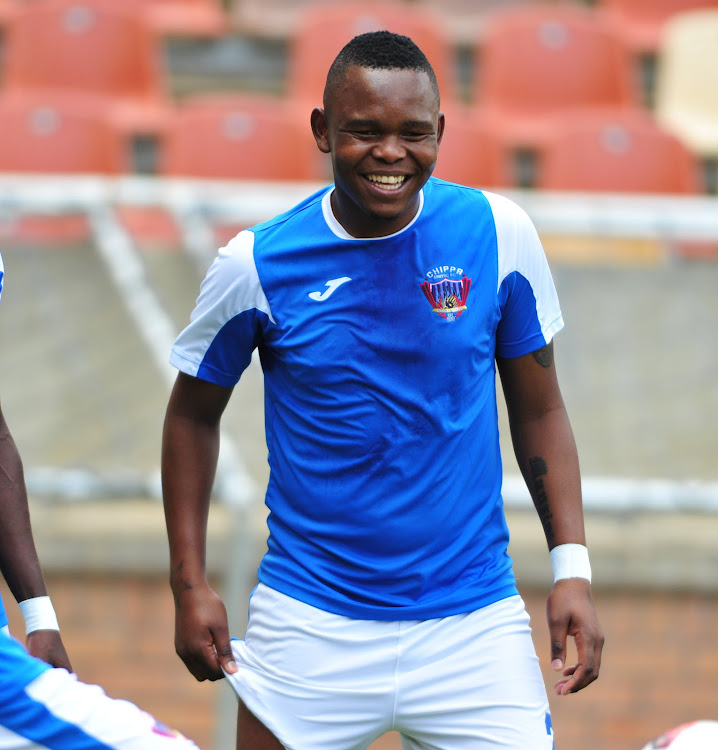 Lerato Manzini of Chippa United was on target for the home side in the Absa Premiership draw at home against Highlands Park.
Image: Kabelo Leputu/BackpagePix

Chippa United were forced to settle for a 1-1 home draw against Highlands Park in their Absa Premiership fixture at Nelson Mandela Bay Stadium on Sunday.

The point was good enough to lift the Port Elizabeth-based professional side out of the relegation playoff spot.

But Chippa did not show any sense of urgency in the first half and appeared to take a laid back approach to the game.

The Lions of the North took all the spot light and attacked with all they had in search of an opening goal.

The visitors' first attempt at goal came just 10 minutes as an unmarked Sabelo Nyembe fired a sizzling strike at Chippa’s goalkeeper Mbonngeni Mzimela but without success.

After the first half hour the Chilli Boys made some attempts to break into Highlands half but were received by an alert Highlands backline.

It was only in the 36th minute when coach Clinton Larsen’s troops got a shot on target but Andile Mbanyane’s attempt also failed to find the net.

After a few more chances, Nyembe eventually managed to put his team into lead after he received a pass from teammate Luckyboy Mokoena which he latched onto to find the back of the net despite a couple of deflections.

But Highlands' celebrations were short lived as Lerato Manzini levelled the score line to make it 1-1.

Emotions ran high after referee Philip Tinyani blew the whistle for halftime and there was a commotion among the players. The end result saw Chippa’s Frederic Nsabiyumva and Peter Shalulile of Highlands, each receive a yellow card before entering the tunnel for the break.

The hosts came out fired up in the second half creating problems for Highlands back line.

Manzini once again tested the visitors in the 49th minute in an attempt to double Chippa’s score line, but his strike missed the target.

Chippa received a free kick just outside the box which gave Mbenyane a chance to put his side into the lead again but the shot nestled comfortably in the hands of Highlands goalkeeper Marlon Heugh.

Highlands also pushed for the winner and also made some threatening journeys into the Chippa goalmouth but without any luck.

The Chilli Boys are now in 14th position with 21 points from 24 matches but are far from being out of danger. They are level on points with Baroka  who have now dropped to 15th  on goal difference.

A win against Highlands would have been a much more pleasing result for coach Larsen as his side still stare possible relegation square in the face, but his players were not hungry enough on Sunday, and they gave the visitors too much space to play.