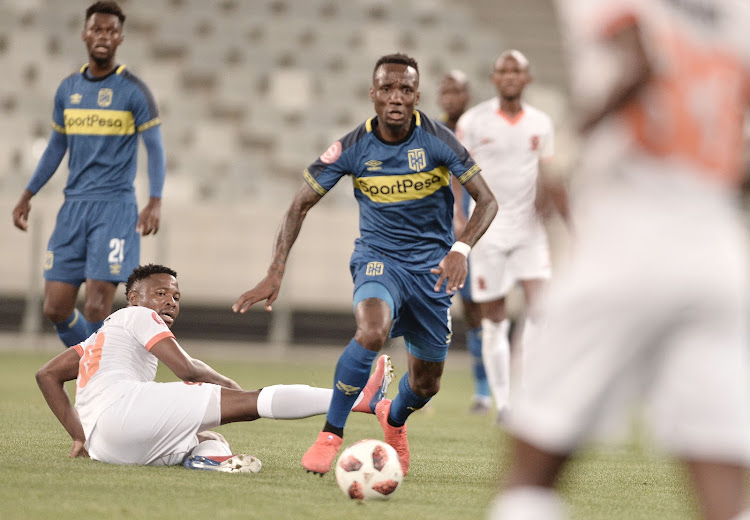 Cape Town City’s title hopes took a dent when they were held to a 0-0 Absa Premiership draw by Polokwane City at the Cape Town Stadium on Friday night.

Coach Benni McCarthy cut a frustrated figure on the sidelines as his side failed to spark against a resolute Polokwane outfit that had clearly come for a point and could not be coaxed into going for more.

The Citizens have been in fine goal-scoring form of late, especially at home, but failed to create many clear-cut opportunities as the visitors put men behind the ball and remained organized and disciplined throughout.

McCarthy’s side are now three points behind league leaders Sundowns, but have played a game more, while Polokwane stay in sixth.

Surprise Ralani had the first opportunity of the game when he was the unlikely figure on the end of a Chris David free-kick, but his glancing header went wide.

Riyaad Norodien fluffed two early chance, first mis-kicking the ball after working himself into a shooting position, and the offering a ‘fresh air’ shot to a brilliant Teko Modise ball into the box.

David then forced a good save from City keeper George Chigova with a curling effort from the edge of the box in what was a bright start to the game from the former Dutch junior international, who faded in the second period.

The visitors should have been ahead when Bongani Booi showed great pace to race clear of the defence, but he lifted his shot past Peter Leeuwenburgh in the home goal and wide of the post.

Nice work around the box saw Ralani tee-up Kermit Erasmus on the stroke of half-time, but the forward’s shot was straight at Chigova.

Some neat footwork allowed Erasmus to spin and shoot early in the second period, but his effort was blocked, while David wanted too many touches of the ball after he was expertly set-up by Norodien.

Erasmus blazed over when he should have hit the target, while substitute Siphelele Mthembu shot straight at Chigova from 10 yards.

There will be a worry for Bafana Bafana coach Stuart Baxter after home captain Thami Mkhize limped off in the final 10 minutes with what looked like a muscle problem.

Polokwane were able to wind down the clock without much further alarm, taking home with them the point they quite clearly arrived in Cape Town for.

Next up for the Cape Town club is a Nedbank Cup quarterfinal away against Kaizer Chiefs on March 31, while Polokwane are not in action again until they host Limpopo rivals Black Leopards on April 7.