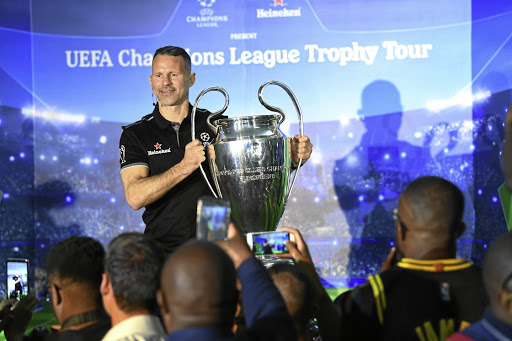 With the 20-year anniversary of their miraculous Uefa Champions League triumph around the corner, Manchester United legend Ryan Giggs took time to reminisce about that unforgettable final.

It was two decades ago on May 26 at the Camp Nou in Barcelona where the Red Devils staged one of the most dramatic comebacks in Champions League history.

With United 1-0 down in injury time, two quick goals from Teddy Sheringham and Ole Gunnar Solskjaer snatched the victory.

Giggs, who is in the country as an ambassador for the Uefa tournament, gave his view on which of United's two Champions League-winning teams (1999 or 2008) was the best.

Wales have appointed former Manchester United winger Ryan Giggs as their manager, the Football Association of Wales announced on social media on ...
Sport
4 years ago

"I think because the 1999 group won the treble I would have to say that was the greatest team," Giggs said in Sandton yesterday.

"To consider that Paul Scholes and Roy Keane were not in the final but we still won it. But the 2008 team that won it was also very special.

"They were both very good teams but I wouldn't argue with someone who said the team with Cristiano Ronaldo and Wayne Rooney was better."

The current Man United team, coached by Solskjaer, will need to draw some inspiration from that legendary team ahead of their second leg round-of-16 clash with French giants PSG in Paris tomorrow night.

The English suffered a 2-0 loss in the first leg at home two weeks ago.

"I think Ole has brought back the belief in the team so now when fans go to the stadium they do so with hope that this team can achieve great things, even a comeback against PSG," Giggs said.

The 45-year-old Welshman is in the country for the Champions League trophy tour.

"I know how fanatical South African football fans are. I have seen it as a player in the times we have come to play here," he said.

Tomorrow the trophy tour will head to Durban before moving to Namibia, Indonesia, Mozambique, China, Nigeria and the US, before the final on June 1 in Madrid, Spain.