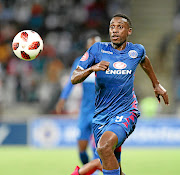 SuperSport United coach Kaitano Tembo has hinted they would like to keep on-loan striker Mxolisi Macuphu beyond the end of the season.

Macuphu joined SuperSport on a six-month loan deal from Bidvest Wits in January. The lanky striker has since fitted like a glove at Matsatsantsa, netting three goals in four matches.

"His [Macuphu] combination with Bradley Grobler has made a huge difference. Those are the two players most defenders won't want to meet, because they are strong and they complement each other very well. It would be nice to have him even after this season,'' said Tembo of Macuphu.

Nevertheless, the Matsatsantsa mentor acknowledges the reality that the ball is in Wits' court, as they are Macuphu's mother club. Tembo farther explained how Macuphu prompted them to alter their approach.

"We have to respect that he's a Wits player. We do not want to get way ahead of ourselves. They gave us a player and we really appreciate that, because he has made a lot of difference in our team. We will talk. it will depend on Wits what they want to do with him and we will take it from there.''

"So, when he arrived we knew that we wanted to change the way we play. We were playing with one striker, but now we are playing with two strikers because in him we found a good player.''

The Tshwane-based side is now five points behind their cross-town foes Mamelodi Sundowns, who top the standings with 40 points.

"We always want to take it game by game. that's very important. This result [against Chippa] takes us to a good position [fifth]. Team on top are dropping points. the ones who are fighting for top-eight are also dropping points. This league is very unpredictable,'' said Tembo when asked about their title chances.