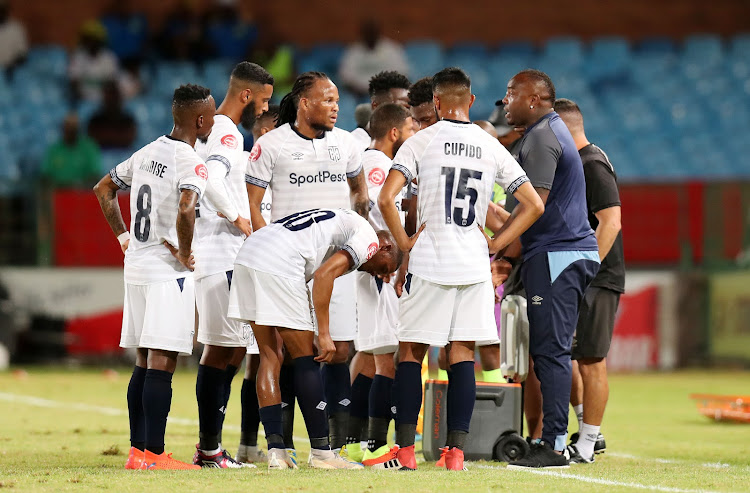 Cape Town City head coach Benni McCarthy in a discussion with his players during an Absa Premiership match against Mamelodi Sundowns at Loftus.
Image: Muzi Ntombela/BackpagePix

It said something of the internal conflict that standpoint created with the natural competitive instinct of McCarthy - a winner throughout his career as a player - that when pressed on it he paused‚ drew a breath‚ then responded with with a grin: "Football is for winning."

City came back from 2-0 down at the break with three second-half goals against now third-placed Wits.

McCarthy was asked about the growing confidence of Kermit Erasmus‚ who scored a second goal in two games and set up another as City bounced back from a 3-2 midweek defeat against Mamelodi Sundowns.

"Like I've said‚ hard work beats talent‚" McCarthy said of the former Bafana Bafana striker‚ who has had a reputation for a low work-rate.

"A lot of players play on the talent and then they forget that‚ you know‚ you still have to put in a shift. And when they combine the two‚ then that's great.

"And‚ ja‚ Kermie‚ he's a player who wants to improve and wants to be better. He's demanding of his teammates.

"That's why I'm so delighted to have him. Because I want a teammate who if I mess up‚ I don't want someone always saying‚ "hard luck‚ hard luck"‚ and then I'm never going to change.

"And that's where if we can get Chris David [City's new Dutch signing who set up Erasmus's goal] up to speed‚ because you see just the little defence-splitting passes that you need.

"And then with the movement of Kermit‚ and the movement of 'Shaka' [Siphelele Mthembu] when he comes back‚ and if we get Chris into the pace of our league then yeah‚ then we've got a good partnership.

"And then ja‚ we can sure enjoy the run that we're on now‚ and mix up there with the Sundownses‚ the Witses‚ Pirates‚ Chiefs‚ SuperSportses.

"We pride ourselves that we're a hard-working tream and we've got quality and we want to be among the best.

"And every week is a building process for us.

"I don't think we're championship material just yet. But we're working towards that.

"And second-half performances like this‚ you can see that if the guys just believe a little bit more‚ then they know that in the near future‚ next season‚ they could be more than just working towards a championship team‚ but make themselves contenders."

Pressed on City's role this season‚ which McCarthy has said is more to disturb the chasing pack‚ the former FC Porto striker said: "Football is for winners. We play to win. And it's painful when you lose.

"And people might think‚ ah OK‚ it was normal and expected for Sundowns to run us down. But for us it was painful in the dressing room. Because we back ourselves against everybody.

"We like to take the hand grenade‚ and pull the pin and throw it in that mob there. And then see what happens.

"But like I said‚ we don't want to get ahead ourselves."

Saturday March 2‚ 2019‚ began like any other day in East London and there was no hint to the mayhem and tragic scenes that would see Siphiwo “Mawawa” ...
Sport
3 years ago

Tornado FC boss Siphiwo “Mawawa” Nyobo was shot dead outside as he was leaving an East London stadium on Saturday afternoon.
Sport
3 years ago
Next Article