Out of depth: The 'CB' without 'D' not working at Kaizer Chiefs 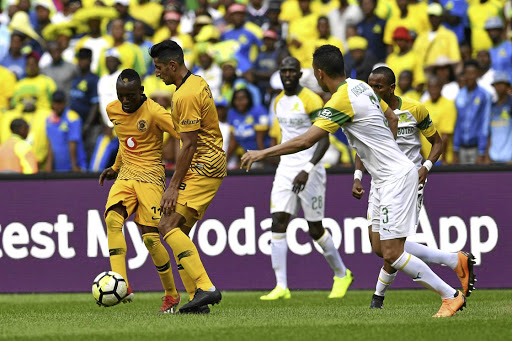 Billiat and Castro have one goal each in 2019 as Amakhosi continue to falter in league. /Lefty Shivambu/Gallo Images

When two of the three pieces of the attacking triumvirate formerly known as the "CBD" made their way to Naturena, Kaizer Chiefs fans hailed it as the beginning of a new chapter after a long trophy drought.

Leonardo Castro and Khama Billiat arrived at the club last year with much fanfare, but their first season back together has been a major disappointment.

When they played together at Sundowns, the combination of Castro, Billiat and Keagan Dolly was affectionately known as the "CBD".

It tore opponents to shreds and they were catalysts for Sundowns' domestic and continental dominance.

Chiefs' attempt to reinvent the "CB without the D" has been a failure because they lack that Dolly-esque midfielder to complete the trifecta.

Kaizer Chiefs held to a draw in Polokwane

Kaizer Chiefs all-but confirmed themselves also-rans in the Absa Premiership title race being held to a 1-1 draw by Polokwane City at Peter Mokaba ...
Sport
3 years ago

Former Sundowns technical director Mike Ntombela feels that the CBD worked at Sundowns because they were surrounded by players of similar quality.

"Look at the players who were around the CBD at Sundowns, and it's not difficult to see why it worked," Ntombela said.

"Before players change teams they need to think carefully before moving, especially because Billiat and Castro were so well taken care of at Sundowns. The technical team worked very hard to ensure that they got the best out of those three guys."

In many ways, Chiefs are still stuck in the past as they still very much depend on members of the league-conquering side of 2014, including George Maluleka, Willard Katsande and Bernard Parker.

Both Castro and Billiat have one goal each in 2019 as Amakhosi continue to falter in the Premier Soccer League.

Castro has scored only six goals in domestic football while Billiat has bagged seven.

If Chiefs still harbour hopes of ending their drought, the "CB without the D" will need to carry the team in the Nedbank Cup going forward after struggling against amateurs Tornado and the Magic FC in the previous rounds.