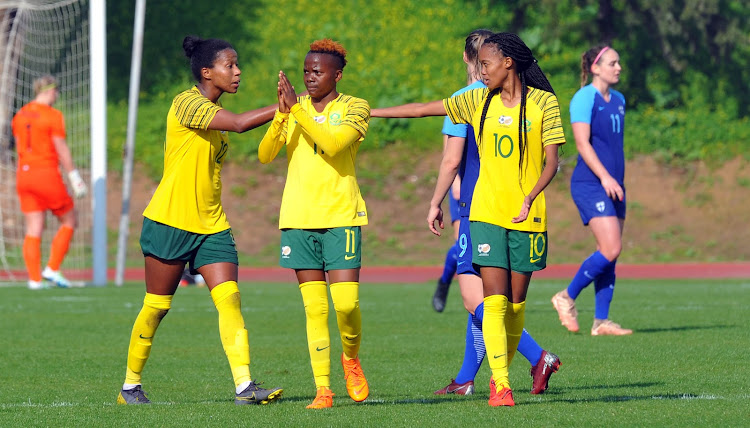 Thembi Kgatlana of South Africa celebrates goal with teammates during the Cyprus Cup match between South Africa and Finland on the 27 February 2019 at GSZ Stadium, Cyprus.
Image: Sydney Mahlangu/ BackpagePix

Thembi Kgatlana scored a late equalizer as Banyana Banyana twice came from behind to draw 2-2 with Finland in their opening match of the Cyprus Cup on Wednesday.

Banyana trailed early in the second half to Juliette Kemppi’s opener‚ before Leandra Smeda equalized from the penalty-spot.

The Fins‚ ranked number 28 in the world‚ 20 positions higher than Banyana‚ restored their lead through Adelina Engman‚ but Kgatlana netted eight minutes from time to grab a point for the South Africans.

Banyana were captained on the day by Refiloe Jane‚ who was making her 100th appearance in the national team and was handed a commemorative jersey before the fixture got under-way.

Coach Des Ellis had said before the tournament that she would experiment and left star players Thembi Kgatlana and Linda Motlhalo on the bench.

Finland saw all of the early ball‚ pinning Banyana back in their own half but the South Africans weathered the early onslaught.

They were unable to offer much at the other end of the pitch though as Rhoda Mulaudzi put a header over the bar‚ and then fired wide with just the keeper to beat after a cross from Smeda.

The scores were level at the break‚ but Finland hit the front three minutes into the second period when forward Kemppi produced a neat finish as the rain began to lash down.

The players had to leave the field on the hour-mark due to the heavy rain‚ shortly after Motlhalo and Kgatlana had been introduced‚ but returned after 10 minutes or so.

Banyana equalized when Jermaine Seoposenwe was fouled in the box and Smeda made no mistake with her spot-kick.

But just as they pushed for a winner they were pegged back by Engman‚ who curled in an excellent shot to put the European side ahead.

Kgatlana had the last laugh though with a typical solo effort‚ as the reigning CAF Women’s Footballer of the Year ran at the Finland defence before firing into the back of the net.

Banyana are next in action on Friday when they play North Korea‚ who are ranked 11th in the world and should present an even bigger challenge for coach Des Ellis’ side.

Their final pool game will be on Monday against the Czech Republic.