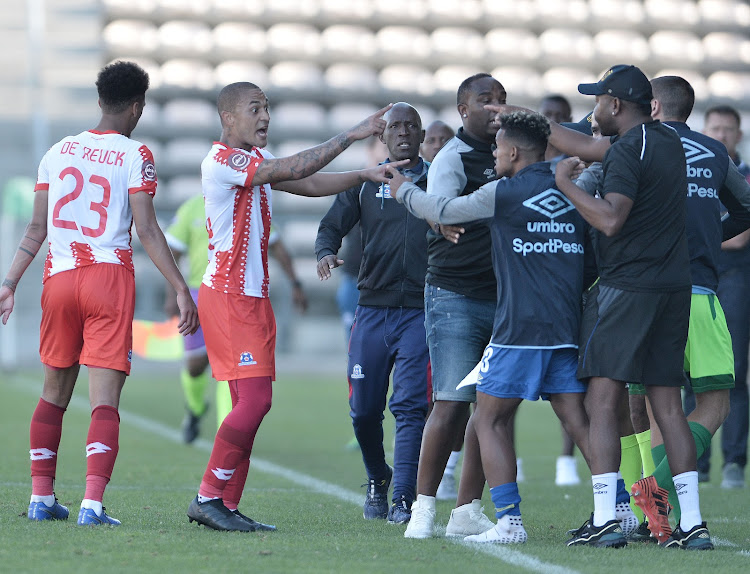 Benni McCarthy has played down the touchline fracas that delayed the end of Cape Town City’s 3-2 Absa Premiership victory over Maritzurg United on Saturday‚ saying he played peacemaker and likening United to a snapping dog trapped in a corner.

But TV pictures of the fighting in the tunnel contradict McCarthy's assertion as he rushed from his bench to join in the commotion and is seen with his hands around the neck of a member of the Maritzburg staff.

His feisty temper and frequent run-ins with referees on the side of the pitch are tarnishing his golden image‚ even while his team excels on the pitch and remains in the hunt for Absa Premiership and Nedbank Cup honours.

Ugly scenes broke out in the dying minutes of the game following an altercation between City assistant coach Rayaan Jacobs and Maritzburg defender Rushine de Reuck after both had been sent to the changerooms.

Both benches were emptied as a scuffle broke out in the tunnel‚ with McCarthy in the mix as well‚ though he claims he was there to defuse the situation and believes the incident is understandable given what is at stake.

“People have to understand that the stakes are high!” McCarthy says.

"To lose that status is massive‚ so tempers are going to fly.”

McCarthy adds he did not see what lit the flame that sparked the ugly scenes.

“I genuinely don’t know. I don’t know how it was that he [De Reuck] got a red card because I was giving instructions to my players. We had our backs against the wall after their second goal.

“The ball was going out and they were fetching it [quickly]. You know if you are winning and the ball goes out‚ you stroll over‚ you don’t want the one thrown to you [by the ball boys]‚ you want the exact one that went out.

“If you are on the losing side you chase everything. The ball came to our side and rolled past me. I could have stopped it‚ but I have got white sneakers and I’m not going to get my sneakers dirty to stop the ball for them!

“So the ball rolled past me and I’m shouting instructions to [Ebrahim] Seedat‚ telling him to tuck inside a little bit. Then I just saw the commotion‚ I honestly didn’t see what happened.

“When I looked it was Matthew [Rusike]‚ our bench … because their players were coming. I genuinely don’t know what was the cause‚ if someone didn’t give the ball or kicked the ball away.

“Then [Rushine] De Reuck pushed my coach Rayaan and that’s when … obviously the players are getting involved then. But I am just defusing‚ this time I was not in the middle.”

The pushing and shoving quickly got out of hand and McCarthy admitted there was some lingering anger from his team following the 3-0 victory over Highlands Park on Friday night during which midfielders Thabo Nodada and Roland Putsche received season-ending injuries from incidents that went unpunished by match officials.

“You stop one fight here and then there is another fight breaking out there. But at this time of the game‚ you [Maritzburg] are rock bottom and you think if you get a point here‚ it can be the start of something for the next game.

“The tempers will fly. When you put a dog in a corner and he wants to get out‚ what is he going to do? He is going to snap at you. I think that is what happened. The provocation‚ and then the players snap because of the situation they are in.

“For us‚ we are very touchy … the Nodada injury and nothing happens‚ so we think teams have this thing about kicking us because we want to play nice football.

"They say‚ ’let’s bully them’‚ they think we are pushovers … we’ll show them who is pushovers.”

Maritzburg coach Eric Tinkler had a different take on events and felt referee Kulasande Qongqo had lost control of the game‚ leading to the incident.

”We were chasing the game‚” Tinkler says.

“The ball goes out for a throw-in and our player [De Reuck] goes to fetch the ball. The City player‚ [Matthew] Rusike‚ throws the ball away and it is only normal‚ out of frustration‚ that he is going to push the guy. It's only normal.

"What does it lead to? My player getting a second yellow card and sent-off. Did Rusike get a card? No. Then you've got the analyst [Jacobs] also coming and tripping and pulling my player over. What is he doing there?

"It's sad how it ended‚ to be honest.

"It's shocking. We need to be more protected in those areas. I was disappointed with what happened there with the officiating. He [Qongqo] lost control of the game."