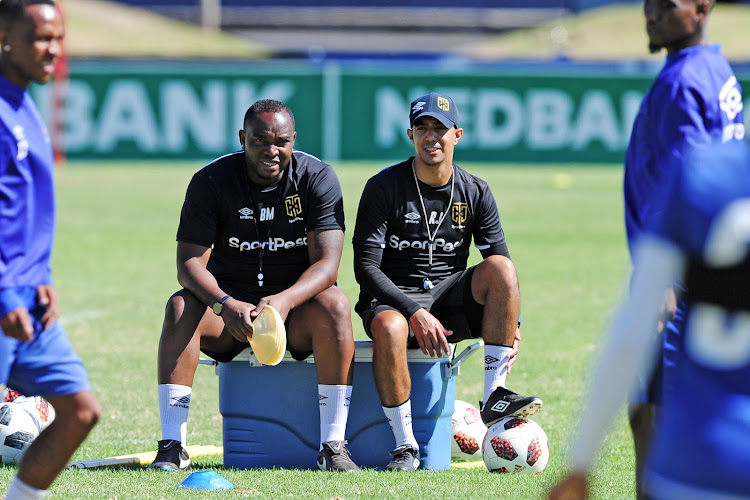 Mamelodi Sundowns are not invincible‚ and Cape Town City will travel to Pretoria intent on taking all three points off the Brazilians in their Absa Premiership matchup on Wednesday night‚ City coach Benni McCarthy has said.

That was McCarthy’s fighting talk ahead of two games on the road in Gauteng he has labeled City’s “championship matches” against second-placed Sundowns at Loftus Versfeld (kickoff 7.30pm)‚ then leaders Bidvest Wits at Bidvest Stadium on Saturday night.

City‚ having edged their way back into fourth place after a mid-season‚ mid-table slump‚ in the coming week in Gauteng will answer the question of whether they have genuine title credentials in 2018-19.

McCarthy‚ tipped by Downs counterpart Pitso Mosimane this past weekend as a future Bafana Bafana coach‚ stressed in-form City’s need to not be in awe of 2016 African champions Sundowns.

“We believe in ourselves. And we’ve stopped caring about what was happening in other peoples’ camps – Chiefs‚ Sundowns‚ Pirates‚ Wits‚ SuperSport‚” the former FC Porto and Blackburn Rovers striker said.

“We are only focusing on ourselves. We’re worrying what’s on our plate.

“We’re not being greedy. We try and deal with what we have in front of us‚ and we work on a daily basis towards that.

“And now our next objective is Sundowns. They’ve got the best players in the league.

“But they’ve got a lot of things on their plate. They’ve got Champions League football‚ and the games are coming thick and fast for them.

“So it’s an away game for us‚ but it’s not as easy for Sundowns as people think it will be.

“They know we’re a team who want to play football the way they want to play. And we are doing it week-in‚ week-out.

“So it’s going to be a good‚ competitive game. But we’re going there for what’s on offer – three points and nothing else.

“We know it’s not going to be easy. But‚ ja‚ we give ourselves a fighting chance.

“Polokwane City went there‚ and no-one gave them a chance‚ and they came away with a point.

City beat Maritzburg United 3-2 at Athlone Stadium on Saturday‚ in a foul-tempered game.

McCarthy said‚ while he respects Sundowns and their awesome player and coaching staff quality‚ he does not expect as intense a contest as against desperate‚ last-placed United.

Sundowns drew 1-1 with 10 men against Wits at Bidvest on Saturday.