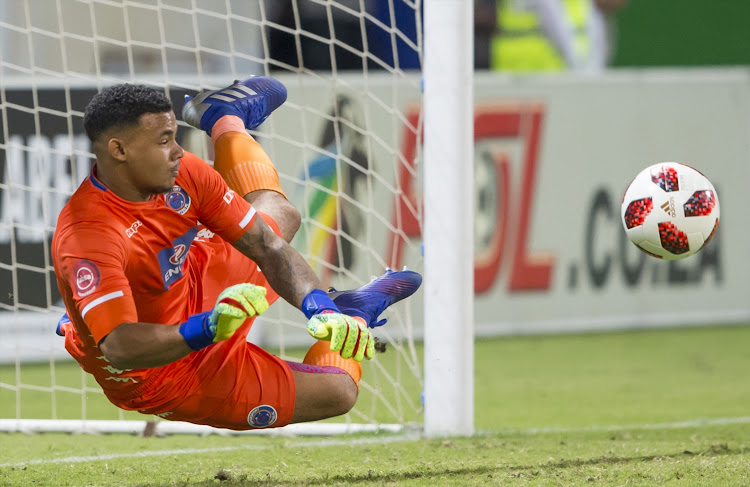 Clayton Daniels scored the winning goal but Ronwen Williams proved the hero as SuperSport United breathed new life into their Absa Premiership title challenge with a 1-0 victory over Orlando Pirates at the Mbombela Stadium on Wednesday.

Daniels headed home in the second period to give SuperSport a deserved victory that leaves them five points off pace-setters Bidvest Wits and clinging on to their championship hopes.

Pirates defender Happy Jele had a penalty saved by Williams as the Bafana Bafana gloveman made a series of superb stops to deny the visitors, who remain four points behind Wits with a third of the season played.

The Buccaneers have now gone six games without a win in all competitions, and suffered a first Absa Premiership defeat in 16 games since a loss to Bloemfontein Celtic in August.

Pirates coach Micho Sredojevic made three changes from the side that lost to African champions Esperance last time out, bringing in Abbubaker Mobara, Musa Nyatama and Xola Mlambo for Paseka Mako, Linda Mntambo and Asavela Mbekile.

SuperSport were without talismanic midfielder Teboho Mokoena as he served a suspension.

Pirates were unfortunate early on when Nyatama had the ball in the back of the net, but the match officials ruled he was offside when replays showed he was at least a yard on.

SuperSport should have been ahead on 10 minutes when they had a five on three break, working the ball to Siyabonga Nhlapo in space but his low shot was well saved by Wayne Sandilands in the Pirates goal.

The keeper did well again when Daniels headed towards goal and the experienced gloveman flung himself to his left to beat the ball to safety.

Bradley Grobler then teed-up Mxolisi Macuphu for an excellent chance, but the shot from the latter lacked the power to trouble Sandilands as SuperSport continued to create the better chances.

Evans Rusike bore down on goal on the hour-mark but his low drove was straight at Sandilands, and minutes later SuperSport got the goal their play deserved.

Aubrey Modiba’s corner from the left was headed home by Daniels, the Matsatsantsa defender left unmarked having given Pirates a warning in the first half.

There was a nervous moment for Williams when he inexplicably tried to chest a 40-yard shot from Thembinkosi Lorch and the ball almost squirmed away from him before he was able to recover.

Pirates were given a lifeline when Rusike handled the ball just inside the box and referee Victor Hlungwani pointed to the spot after consulting with his assistant.

But Jele’s penalty was poor and saved by Williams, while Justin Shonga blasted the ball over the bar from the follow-up with the goal gaping.

Next up for Pirates is a home clash with AmaZulu on Saturday, while SuperSport host Baroka FC on the same evening. this text.

The home ground is getting too big for Glamour Boys' midweek games.
Sport
2 years ago
Next Article