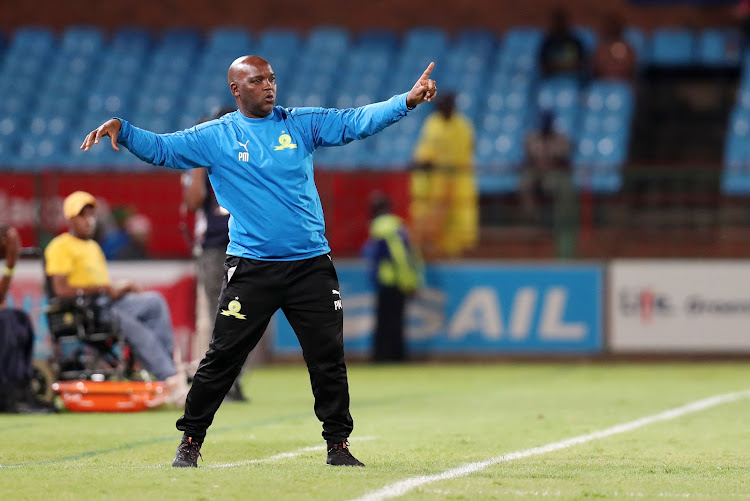 Pitso Mosimane, coach of Mamelodi Sundowns during the Absa Premiership 2018/19 match between Mamelodi Sundowns and Polokwane City at the Loftus Versveld Stadium, Pretoria on the 19 February 2019.
Image: ©Muzi Ntombela/BackpagePix

Pitso Mosimane has pleaded with the Mamelodi Sundowns fans to forgive goalkeeper Denis Onyango for the blunder he made during the costly 1-1 draw with Polokwane City on Tuesday.

Sundowns were leading 1-0 through a goal by Themba Zwane and in control of the game when Onyango fumbled a speculative header from City striker Salulani Phiri‚ then the ball hit his back heel and finally trickled over his own line for one of the most bizarre own goals this season.

Brazilians missed out on a opportunity to go level on points with Bidvest Wits at the top of the Absa Premiership standings after the costly draw and they remain second with 35 points though they have two games in hand.

“He is the number one goalkeeper in Africa but he made a big mistake‚” said Mosimane after the game.

“You must always have a budget of one or two costly mistakes in a year and that budget you have to respect it.

"It also includes mistakes from center-backs and this happens everywhere.

"In our match against Asec Mimosas‚ Onyano was super for this team and we can’t talk different about him after one mistake.”

Onyango was so distraught after the mistake that he shed tears as he walked back to the dressing room at halt-time where he was consoled by his team-mates.

Mosimane said he reminded the gutted goalkeeper about the many times he has almost single-handedly saved the team from certain defeat in the past.

“I told him to remember all the games where he saved us and that he must be a big man‚" Mosimane said.

"Onyango has saved us many times in the past and we mustn’t criticize him for one mistake.

"I have seen mistakes before and it is part and parcel of the game‚ you take it in the chin as a team and move on.”

Reflecting on the game itself‚ Mosimane said they played differently because they wanted to protect Zwane’s early goal.

The Sundowns coach said he was unhappy after his charges failed to secure maximum points at home.

“Maybe the early lead made us play a little bit different where we wanted to protect it and because of that we allowed them to play‚" he said.

"At the same time you have to accept that they are a good team and that is why they are where they are on the log.

“They upped their game and it was not easy for us‚ we are unhappy that we did not get the three points.

"Polokwane City lost 3-0 to Marizburg United and against us it was a different game.

"We beat Black Leopards 3-0 here but they did well against Bidvest Wits and they took the game to penalties. There are no obvious matches and you have to fight for your points.

“It is two points lost but at the same time you can say it is one gained.

"I thought their goalkeeper was going to be the man of the match because he saved everything. It is one of those things that you just have to accept and move on.”