Injury rips the heart out of the Cape Town City midfield 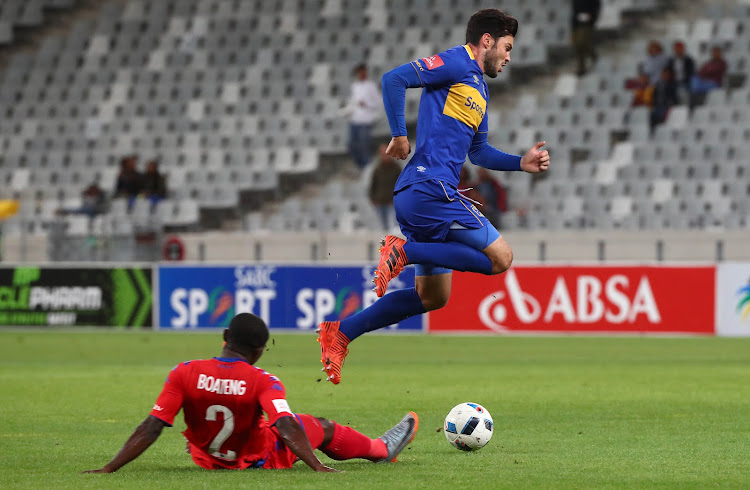 Roland Putsche is one more casualty added to the pile, as the injury curse continues to tear through Cape Town City.
Image: Chris Ricco/BackpagePix

Roland Putsche has been ruled out for the rest of the season after suffering a serious knee injury in Friday’s Nedbank Cup win over Highlands Park and Thabo Nodada could be out for as long as two months after his knee was hurt in the same game.

Coach Benni McCarthy is describing it as a massive blow as City‚ who are only seven points off top place in the Premier Soccer League standings‚ look to get into the title race as well as keep up their push for another cup trophy.

They are among the eight sides who go into Thursday’s Nedbank Cup quarter-final draw although it will now be with mixed feelings.

Putsche hurt his knee early on in Friday’s match at the Cape Town Stadium and had to go off‚ replaced by Teko Modise.

The industrious Austrian‚ who was just signed a contract extension but has been courted by Orlando Pirates‚ faces surgery.

Three goals in the space of 12 minutes handed Cape Town City a berth in the quarter-finals of the Nedbank Cup as they hammered Highlands Park 3-0 in ...
Sport
2 years ago

Nodada‚ who has been one of the outstanding players of the season‚ was the victim of a horror studs-up tackle that went unpunished as City scored their opening goal.

He also had to leave the pitch.

With Mpho Matsi and Ayanda Patosi departing on loan in the January transfer window‚ the City midfield is now vastly depleted with the 36-year-old Modise now having to step up and take a major role.

But whether he will be able to play regularly remains to be seen.

The rest of the list of midfielders is made up of wide players‚ which means Kwanda Mngonyama might be shifted forward from centre back to defensive midfielder when City host his old club Maritzburg United at the Athlone Stadium on Saturday.

After that‚ McCarthy’s side have a catch-up game at champions Mamelodi Sundowns next Wednesday‚ February 27.