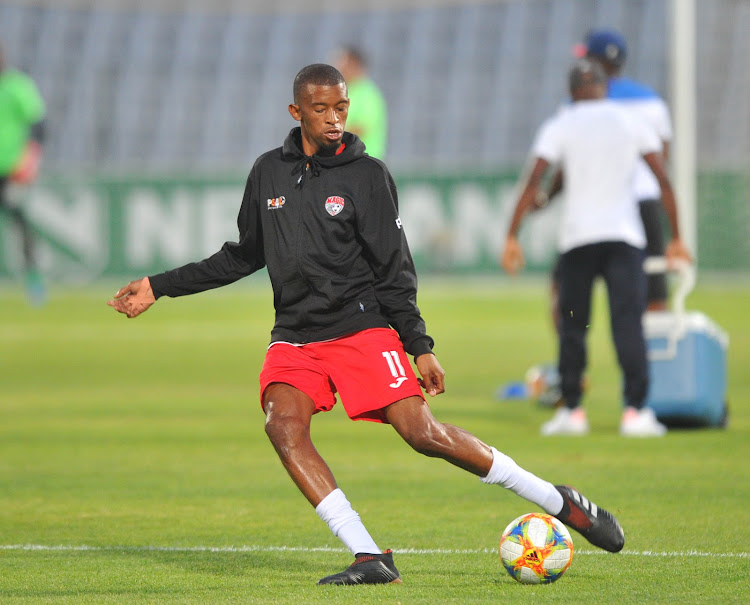 Thando Mngomeni of The Magic FC during the Nedbank Cup Last 32 match against Maccabi FC at Dobsonville Stadium in Soweto on January 29 2019.
Image: Sydney Mahlangu/ BackpagePix

Thando Mngomeni will be thrust back into the national limelight on Sunday when he headlines The Magic side against Kaizer Chiefs in their Nedbank Cup Last 16 clash at the Nelson Mandela Bay Stadium in Port Elizabeth.

Former Bafana Bafana midfielder Mngomeni recently returned from a five-year self-imposed exile from football‚ admitting he had fallen out of love with the sport after an excellent top-flight career that saw him turn out for SuperSport United‚ Mamelodi Sundowns‚ Santos and Bidvest Wits‚ as well as two seasons with Swedish side Helsingborgs.

Having turned 36 on Monday‚ he is now back in the game in a new role‚ that of mentor for The Magic’s young and highly-promising group of players.

"I took five years off football to concentrate on my personal life‚” Mngomeni says.

“I don't think I had the passion anymore‚ I had been a professional since I was 16. But I am slowly regaining my love for the game.

“I'm not bitter about being in the position I’m in‚ there is always the next generation that needs your help and assistance and at this stage with The Magic‚ I’m guiding the youngsters through and hopefully a couple of our boys will be in the NFD or PSL next season.”

"It's quite sad. A lot of guys are not given the opportunity at the highest level [Premier League]. In our league there are a lot of players who have come from the NFD and the PSL who I believe should still be up there in the top leagues.

"For some players‚ Sunday might be about resurrecting their career‚ but we will not be getting ahead of ourselves. We just need to be calm and stay in the moment.”

Mngomeni has been speaking to the younger players in the squad at training about handling the pressure of meeting Chiefs and to relax into the moment.

"The main message is to enjoy it. It's a once in a lifetime opportunity for some of the boys‚ so they must take in the moment‚ play your football and impress the 30‚000 people at the stadium.

"This is the biggest game of our lives. It is a fantasy game‚ 90 or 120 minutes‚ whatever it takes‚ we will try do our best.”

He adds that the fact that the game will be played away from their Cape Town home is no issue for the players.

"When you are playing against Chiefs‚ anywhere in the country will do. It’s like a home game for them wherever they go‚ so we just have to come to the party.”

And the key to victory?

"If we handle our transitions better‚ if we can contain them‚ the counter-attack especially‚ their front-three are pretty quick.

"If we can do our job defensively‚ I am pretty sure our strikers will be banging on their side as well.”

Chiefs to field regular team against amateurs
Sport
2 years ago