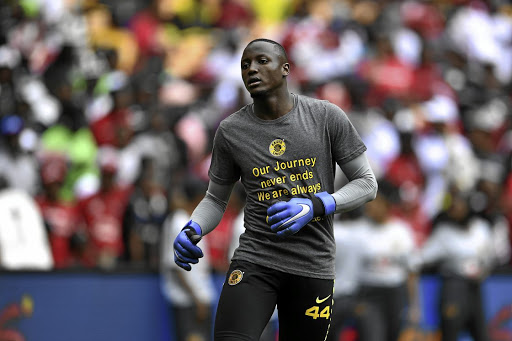 Bruce Bvuma is expected to be in goals on Sunday. /Lefty Shivambu/ Gallo Images

Kaizer Chiefs coach Ernst Middendorp will not be taking any chances when his team come up against amateur side The Magic in the Nedbank Cup last 16.

The Cape side will host Amakhosi at Nelson Mandela Bay Stadium on Sunday (3pm).

Middendorp's team laboured to a 1-0 win over another amateur side Tornado, who like The Magic play in the ABC Motsepe League, in the first round.

Speaking to the media yesterday at the PSL offices in Parktown, Johannesburg, Middendorp insisted that he's going to field the best players at his disposal.

"It's our obligation to qualify for the next round, showing that we take it serious," he said. "The best that we have will be on the field and we are not going to take it easy and show disrespect (to the opponents)."

Chiefs will be without new goalkeeper Daniel Akpeyi, who's cup tied after playing for Chippa United against Sundowns in the last 32 and later joined Chiefs.

Kaizer Chiefs coach Ernst Middendorp was pleased at how new goalkeeper Daniel Akpeyi handled the pressure of being thrown in the deep end for ...
Sport
3 years ago

In his place, Middendorp confirmed that Bruce Bvuma will step in, but the rest of the positions will be filled by the regulars.

Chiefs are almost at full strength and the only players missing are Lebogang Manyama (knee), Itumeleng Khune (shoulder) and Mulomowandau Mathoho (ankle).

Meanwhile, central-defender Daniel Cardoso admitted that they took Tornado lightly in the last 32, only scrapping through and will not make the same mistake.

"We were a bit relaxed and we thought we had won the game before the game even started. We are going up against a similar team (The Magic) and they are sitting second on the log (in the Western Cape stream)," Cardoso added.

The Magic have on their side former PSL player Thando Mngomeni, who's now 36 and last played in the top-flight for Wits five years ago.

They also confirmed the signing of ex-Chiefs left winger Andisiwe Mtsila a week ago. He was promoted from Chiefs's youth team when Steve Komphela was still the head coach and released last year.

Chiefs' record against third-division teams since 2011: