Pirates not out of the running as yet 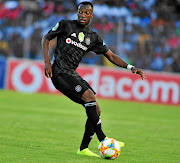 Image: Philip Maeta/Gallo Images The Pirates coach is calling for character from the likes of Justin Shonga.

There's no need for Orlando Pirates to start pressing the panic button after dropping to third in Group B of the CAF Champions League.

Bucs, with five points, are now behind leaders and defending champions Esperance (eight points) and Horoya (seven) after four matches.

Micho Sredojevic's men fell short by losing 2-0 to Esperance away this week, but Pirates' destiny is still in their own hands.

The top two teams qualify for the quarterfinals and with two matches to go, Pirates can still make it through.

They host the whipping boys of the group, FC Platinum of Zimbabwe, next month and a win there would possibly see them back among the top two.

Platinum held Bucs to a goalless draw in the first leg in Bulawayo last month, but would be expected to win in their own backyard, which would make their trip to Guinea to face Horoya in the last match a lot more comfortable.

"We need now to be strong enough and show character in answering [to the defeat] going to the last two matches in the group stage against FC Platinum and Horoya, determined to reach the quarterfinals," Sredojevic said during his post-match press conference in North Africa.

The Serbian admitted that Pirates were "naive" in conceding the first goal, which meant they were chasing the game and later conceded again. He insisted, however, that his team gave it their all despite the defeat.

"In the end, we played with practically six strikers trying our best, but unfortunately we did not get what we wanted," Sredojevic said.

Meanwhile, Pirates will return to domestic league action when they travel to Nelspruit to face SuperSport United at Mbombela Stadium on Wednesday.