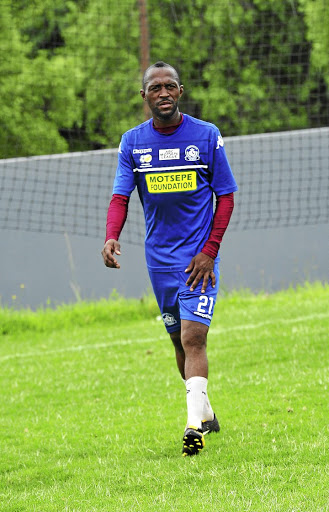 New Baberwa signing Lerato Chabangu is planning to make the most of his stay with the ABC Motsepe League outfit.

"Ace" is back in the game after penning a six-month deal with the Midrand-based club. The 33-year-old former Bafana Bafana midfielder last played for Pretoria Callies, also in the Motsepe League, last year.

He was in the news in the past few months after an old photo of him holding a beer and looking dirty on the sidelines of a football match surfaced on social media.

Chabangu later clarified that it was an old image from seven years ago, but it had triggered interest from Baberwa boss Joe Seanego, who has since handed him a lifeline.

"I'm feeling great my man, because it's been long without me playing, and playing is something that is in me since I was born," he said from the club's training ground yesterday.

"It's a good feeling to come back and play football.

"I'm too much committed because they gave me the chance that no one wanted to give me. So I have to show my gratefulness.

"The environment is very good and they have a lot of quality players. We've got a lot to offer this time."

Former Bafana Bafana international Lerato "All You Need Is Love" Chabangu has been shown some love by ABC Motsepe club Mikhado FC.
Sport
3 years ago

The man who aided in getting Chabangu back on the football field is Pontsho Madumo, who's the owner of Cream Sports Management.

"We went to his hometown Tembisa and tracked him down. We met and spoke about how we could help revive his career," Madumo said. "I then met Bra Joe, who agreed to give him a chance.

"For us as a new company, we are gaining experience by working with people like Lerato, who have been long in the game. We get to know the advantages and disadvantages of working with their previous agents, so we are learning these kind of things from them," he added.

Baberwa are top of the Gauteng stream and are three points ahead of JDR Stars with 10 matches still remaining.

It's not all doom and gloom for former Bafana Bafana international Lerato Chabangu.
Sport
3 years ago

He used to be a high-flyer on and off the field, but now Lerato Chabangu has hit hard times with no income, no home and no car. Forced to move in ...
Sport
4 years ago
Next Article