Cardoso reveals how Kaizer Chiefs trained against mannequins under Solinas 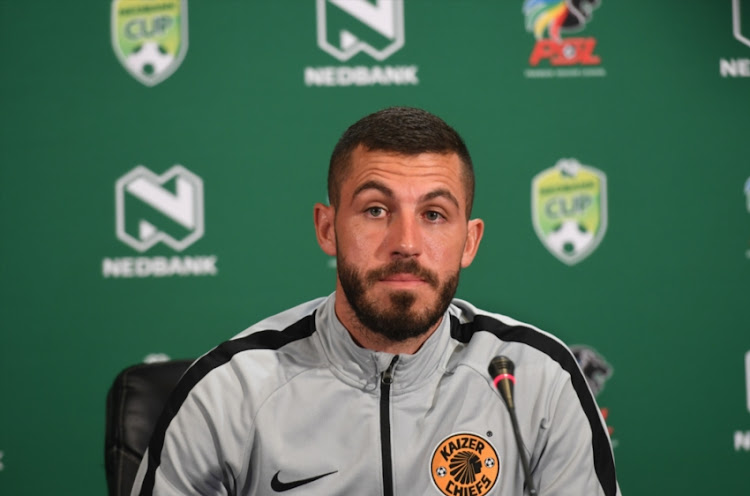 In a remarkably candid admission‚ Cardoso also revealed the Italian‚ who coached Chiefs for just five months until being replaced by Ernst Middendorp on December 9 after a muddled tenure‚ had his defence training against mannequins‚ not fellow players.

Cardoso said Solinas’s apparent favouritism of strikers Khama Billiat – who the coach referred to as the Lionel Messi of the Premier Soccer League (PSL) – and Leonardo Castro‚ while other players were subjected to a high frequency of rotation‚ was confusing for the squad.

The centreback‚ who began the season in shaky form‚ was asked about the confidence he showed on Saturday stepping up for the penalty that gave Chiefs a lead in the 1-1 Absa Premiership Soweto derby draw against Orlando Pirates at FNB Stadium.

“It’s all about confidence‚ and on the day I was very confident in taking the penalty‚” he said.

Cardoso added: “With Giovanni Solinas changing the team‚ it was week in and week out where he would make changes.

“And it kills you as a player‚ and it brings your confidence down.

“And since coach Ernst Middendorp has been there he has believed in me‚ and brought my confidence back up.”

“Ja‚ it is improved you know‚ but I still think we’re leaking silly goals. It’s something that we’ve got to fix at the back. But we work at it at training‚” Cardoso said.

“With Mr Solinas‚ we were using mannequins. It wasn’t physical and there wasn’t any penetration from strikers.

“With coach Ernst coming in we’re doing a lot of small-sided [exercises] and we’re learning how to close at the back.

“One of his sayings is‚ ‘Let them go out – cover the inside’. It’s something that has been in football for long‚ but sometimes you just need to freshen it up again.

“Solinas never really did any physical work with us.”

Cardoso agreed Solinas’s tenure at Naturena was a confused one.

“Ja‚ I mean look‚ if you saw every single game there were five or six changes in the lineup‚ and you can’t get consistency like that.

“You grow in confidence when you’re playing. If you play two games‚ you sit out three games‚ you think to yourself‚ ‘What have I done wrong?’

“But then he’ll tell you he’s just resting you‚ and protecting you. I think it’s an excuse.

“I don’t think he had much of a plan going forward. I mean we used to be on the training ground for three hours.

"And I mean you’re on the training ground for three hours running against mannequins. There’s no structure.

“And now when we go into training it’s energy‚ it’s boosting‚ we’re all over the place. And from three hours to an hour-and-forty minutes‚ it’s a huge difference.”

Cardoso was asked if such a muddled approach‚ with such an unclear direction‚ affected players’ motivation.

“Look the badge itself should be a motivation‚” he said. “But with a coach who is chopping and changing it’s hard.

“He used Khama Billiat and Leonardo Castro every game. But then what are you saying to the others?

“Apparently Khama was known as Messi in South Africa to Solinas. And I think that also got to Khama a bit.

“Look‚ Khama’s a great striker‚ don’t get me wrong. But you can see he’s gone through a dip in form and he’s starting to find it again.